Today we are visiting with 30-Year Old Cardboard and talking Marlins.

1) When the Marlins move in 2012?, will there be anything you will miss at Dolphin/Blockbuster/Landshark Stadium?
When the Marlins move even further South, I will miss the 30-minute drive to the ballpark the most. And with their move to a new stadium, I will also miss the relatively cheap parking price of $10. I am guessing that the new ballpark will charge between $20-$25. YEAH!! The current stadium is set up for football, but I think it happens to be a great place to watch baseball as well. Hopefully the new stadium will be even better.

2) Are there any parameters on "Same Card Different Paths?"
'Same Card, Different Paths' was a fun series to add to '30-YOC'. Originally, the idea came to me from the idea of how it must feel to be a player or team collector that had problems securing a high-profile card due to the 'other' guy. Just ask Night Owl how it feels to have one of his favorite players featured on what is known by 99.9% of collectors as Mike Schmidt's rookie card. 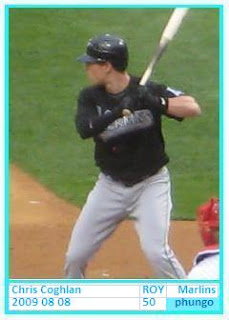 3) How surprising was Chris Coghlin's rookie season?
Coghlan's rookie campaign was incredible. At the start of the year, my eyes were firmly affixed on Cameron Maybin, but Coghlan came out of nowhere and made great strides as the Marlins' lead-off hitter. Had it not been for Maybin's demotion to AA ball, Coghlan may not have received the playing time he got with 'The Fish'. I firmly believe that the lead-off hitter has more pressure on him than any other hitter - and his tremendous success as a rookie was fun to enjoy each and every night. It felt very similar to what Jerome Walton did for the Cubs in '89.

4) How do you feel about the Marlins playing a Home Series vs the Mets in San Juan?
I'm ok with it. But if I were a season ticket owner, and I got billed for three games that were not at 'home' I may have another opinion. I do know that the team is working with any fans that want to make the trip to see the games...

5) Is the Cuban the best regional sandwhich?
Ask most South Floridians and they will say yes. My honest opinion is that you guys in Philadelphia own that title(amongst many others)!!!
Phungo 5 Box Score

Brian has come up with some interesting insights on the Marlins for us and Kudos for bringing the Philly Cheesesteak into the conversation. A well done 5 for 5 for 30-Year Old Cardboard. There are many fine and fun features over at 30-YoC, whether they are chronicling the efforts in collecting the 75 Reds or the exploits of Hall of Famers.

Thanks for helping out with this division rival version of Phungo 5.

For a look back at a previous Phungo 5 Click Here to see our Washington Nationals Q&A with 25 Years of Baseball.
Posted by deal at 11:47 AM