Tough game for the Orioles on Sunday.  They lost 6-3 in extras to the Yankees in a game which the O's could have won had a close call at the plate in the 9th gone the other way.

Jake Arrietta settled down after a giving up a couple of runs on a Curtis Granderson homer in the first.  New Yankee (and short time Phil) Freddy Garcia pitched very well shutting out the Orioles for 6 innings on 2 hits.  The Yanks relief corps did not fare as well.  First Joba Chamberlain gave up a 2 run dinger to Mark Reynolds and then Mariano Rivera had to come in for a four out save.

The Orioles were down 3-2 with two outs in the 9th when Brian Roberts batted with a pair of runners on base.  Roberts ripped a double down the Right Field Line  plating the tying run and leading to a play at the plate.  Fom my seat I thought that pinch runner Robert Andino was out, but on a replay it appeared that Yankees Catcher Russell Martin may not have gotten his glove down.  Regardless the call made was an out.  That play could have given the O's a 4-3 victory, but instead the game went to extras and the Yankees took a 6-3 win in 12 scoring a couple of those runs via some ugly Orioles fielding. 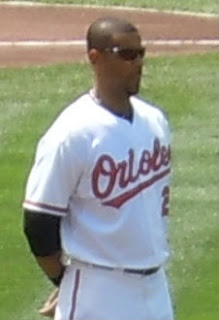 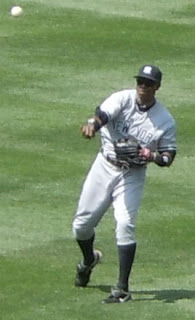 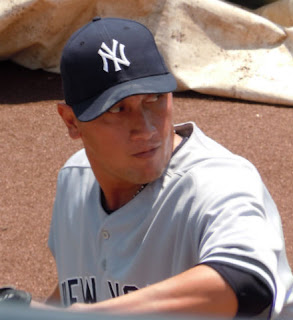 Freddy Garcia
Blah
In Phungo Blog news,  I have opened the potential "Hot Box" of 2011 Heritage.  I will let you know that my research has found that the upside down topps logo box theory is......Urban Legend Only.  My box was a "Not Box" - as in not a Hot Box.  Which is a little disappointing but it was still a fun box to open and I am happy with the decision to build 2011 Heritage.  Hopefully later this week or sometime next week I will get a synopsis of the box posted.
Posted by deal at 12:44 PM