I know what your thinking - how the heck can an Opening Day card be pull of the month - well two things 1) I only opened about 6 or 7 packs this month and half of those were OD.  2) For the year I have opened a dozen maybe 15 packs and have pulled a grand total of 2 Phillies: 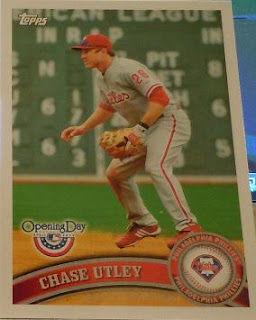 Chase has been on the shelf all spring and is on the DL to start the season, perhaps posting his card for Pull of the month will help his rehab.  I haven't really gotten around to posting about player collections here at Pbungo, but I do have a modest Chase Collection that I should get around to documenting at some point. 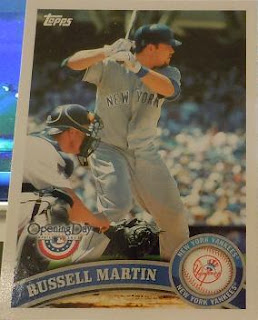 I come down on the NO side of the Photoshopping new Unis on traded/moved players argument.  Funny thing is I enjoy airbrushing.  The trouble is that the P-shop cards have gotten to good for me to identify.  This one I quickly noticed because the P-Shopped Yankee Martin.  In the mythical world that Martin is playing in the Yankees are facing the Padres whom they haven't played since 2008 and those were home games - I am too lazy to figure out the last time the Yanks visited San Diego.  But I am pretty sure that Martin has never faced the Friars in a Yankees Uniform.


The newer Topps Sets are loaded with action shots, I think headshots of the traded players would be fine, in fact I think the trading/signing press conference photos would make for decent cards.  Regardless of what I think, it appears PhotoShopping is in for the moment and there will be plenty of this over the next few years.

I actually kind of like the photoshopped card especially in the case of Opening Day if there is a regular Topps card of the same photo in the players old uni. The oly two cards I got which are clearly photoshopped where I had the Topps card they used different photos. As to the Russell card, maybe the should have 'shopped the catcher as well into an AL uniform.