The family of Robin Roberts has decided to sell much of the Hall of Famers Personal collection of Baseball Memorabilia.  For more on the story check here at Philly.com. 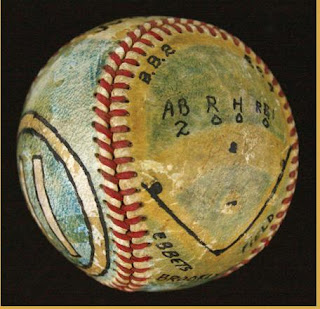 Hunt Auctions is handling the sale - some of the cooler items are game balls from several of the pitchers 285 Wins.

Apparently the Phils catcher Stan Lopata would caption or decorate each of the baseballs.  The Above ball is from 1952-07-02.  That day Roberts and the Phils beat the Brooklyn Dodgers 4-3.  The Dodgers lineup that Roberts defeated featured Jackie Robinson (who homered), Duke Snider, Roy Campanella, and Gil Hodges.  The Phils ran out Richie Ashburn batting leadoff and playing center field.

This Link will direct you to the above ball, from their you can navigate to see several of the other baseballs.

Unfortunately the on-line portion of the auction is closed - the live auction will occur tomorrow Tuesday April 12th at the Phillies Ball Park at 6pm.  At the close of the on-line auction the 1952-07-02 Ball above was going for $164
Posted by deal at 9:01 PM

A very cool ball. Thanks for the link.