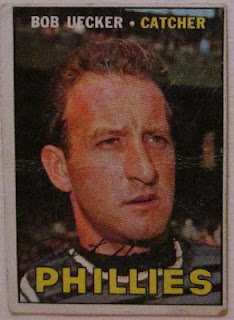 I knew that Bob Uecker played baseball, but until I starting delving into vintage cards I never knew he played for the Phillies.

Uecker's playing career was not long nor was it noteworthy.  He was a catcher for 6 seasons from 1962 through 1967 compiling a .200 batting average. Half of his 14 career Home Runs were hit in the 1966 when he played for the Phillies.  Uecker was the back-up to Tim McCarver on the St Louis Cardinals World Championship Team, but he did not actually play in any series games.

Most people know Bob Uecker as an off the field celebrity featured on TV and film - Most notably as Harry Doyle in the late 80s comedy "Major League" (and it's sequals).

Uecker is also well known to Brewers fans as the radio play by play voice.  He has done work in TV at a national level as well, including scattered playoff games that I can vaguely remember over the years.

In 2003 Uecker received the Ford C Frick Award for Broadcasting from the Baseball Hall of Fame.  This Year the Brewers plan to honor Uecker with a statue outside of Miller Park, The unveiling is planned for August 31 of this year.

I think the 1967 Topps Card above I either received in trade or found at a card show.  This is the final card Topps issued of Uecker during his playing career.  This card has a pretty good crease running down the center, and likely could be found in a dime box.  I imagine one could find a good condition 67 Uecker for a dollar without much looking.

The bulk of his cards were with the Cardinals.  His1963 Topps rookie card features him with Milwaukee's first major league team the Braves.   Recent low sale for the RC was $4.10


Essential Collection
This makes the essential collection based off of Uecker being an off the field Icon and on a Phils Card.
A card of the Natural
Minnie Minoso with his birth name of Orestes
A card for your Team Collection with an Off Field Icon
Sources:
Baseball-Reference Bob Uecker Page
Wikipedia Bob Uecker Page
Posted by deal at 8:11 PM