A few weeks ago we put together a couple of postings featuring Dick Groat. Today as part of our 1964 Phillies series we are taking a look at one of the players sent to the Cardinals when Groat came over to the Phillies. 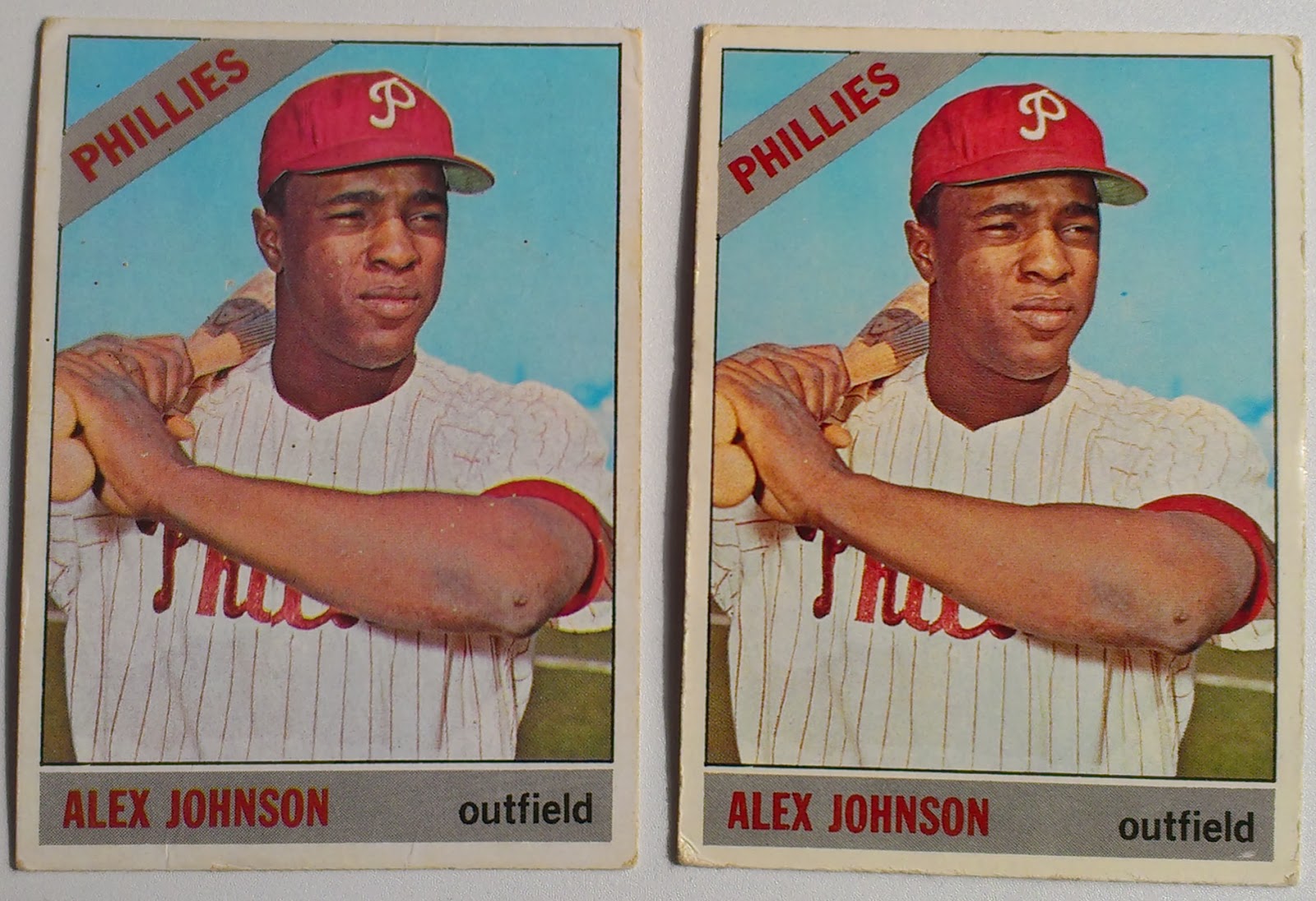 As a rooking 21 year old Alex Johnson played 43 games for the 1964 Phillies. He Debuted on July 25th as the fightins’ starting left fielder. Johnson went 3 for 4 that day foreshadowing the fine season he would have. He batted .303 with 4 homers in 109 ABs – good enough for an OPS+ of 135.

Following his stint with the Phillies Johnson spent the rest of his career as a journeyman outfielder. His best year was with the Angels in 1970, he made his only all-star team and led the AL in hitting.

Johnson was an enigmatic player with a quick bat. His batting average always hung around .300 and he could put up Home Run numbers in the teens. But he appears to have had little or no interest in being a baseball player.

His talent kept him in the majors for 13 years. However, it was with eight different clubs, never lasting more than 2 seasons with any single team. According to his SABR biography by Mark Armour there are numerous accounts of him being benched for various reasons. Johnson appears to have been a contrarian only hustling when he pleased, alienating both teammates and coaches.

Johnson's on field issues may have only hinted at greater problems for the ballplayer.

During the 1971 season Johnson found himself on the cover of Sports Illustrated. Unfortunately it was for all the wrong reasons. There was a series of incidents that led to Johnson suspension by the Angels.

Marvin Miller and the players union filed a grievance which was won by Johnson. He was found to be emotionally disabled. Miller successfully argued that Johnson should have been place on the DL rather than suspended.

Afterwards Johnson was traded to the Indians, he hung on with various teams including his hometown Tigers who gave him his final release at age 34.

A 1998 SI article by Jeff Pearlman found Alex Johnson was running a truck repair company  business that was started by his father. Johnson remained bitter about his time in baseball, but was happy to continue the family business.

1966 Topps
No you are not experiencing double vision, I have not double posted the Alex Johnnson card above. They are actually two different cards. Topps now routinely produces variations across several of it's products, but back in 1966 it was either to correct an error or to add a piece of updated information. 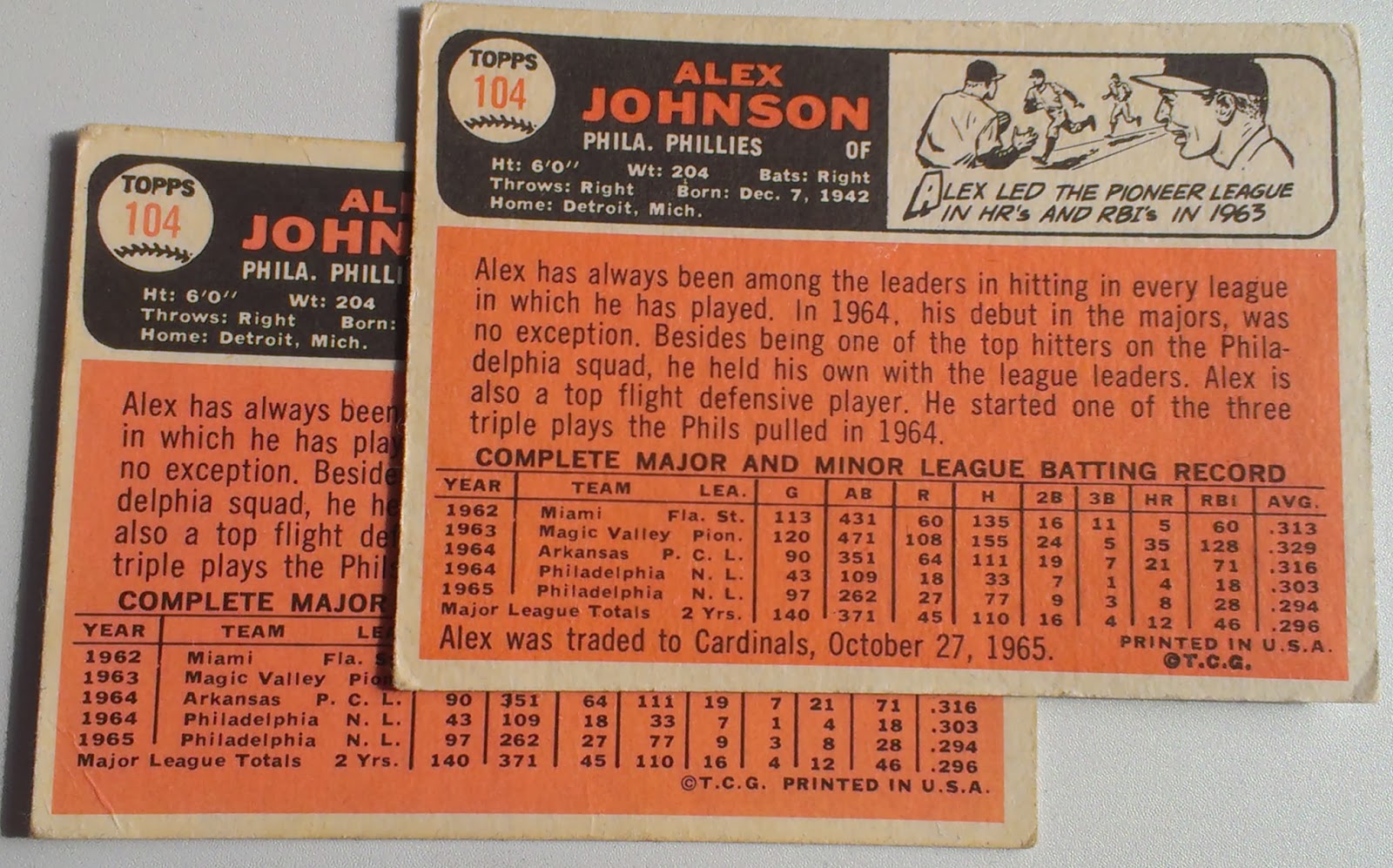 Looking closely at the bottom of the flip of each card one can see that there is an extra line on the bottom of the card in the fore. The addendum mentions the trade of Johnson to the Cardinals. The card also has moved the Topps Chewing Gum (T.C.G) copyright. The card without the trade is somewhat more rare than the traded variation.  Late last year I picked up the scarcer no-trade version via auction for $5.48 - close to half that cost was shipping.

The 1966 Topps Dick Groat (one of many players involved in the Alex Johnson trade) has the same variations and resides right next door to Alex Johson in the Binder at #103.

Don't forget to fill out a bracket on my contest.