This week the Baseball Big Show heads to Anaheim to see the Angels host the Rangers in an AL West battle. One of the first names that comes to mind when those two teams are mentioned is Nolan Ryan 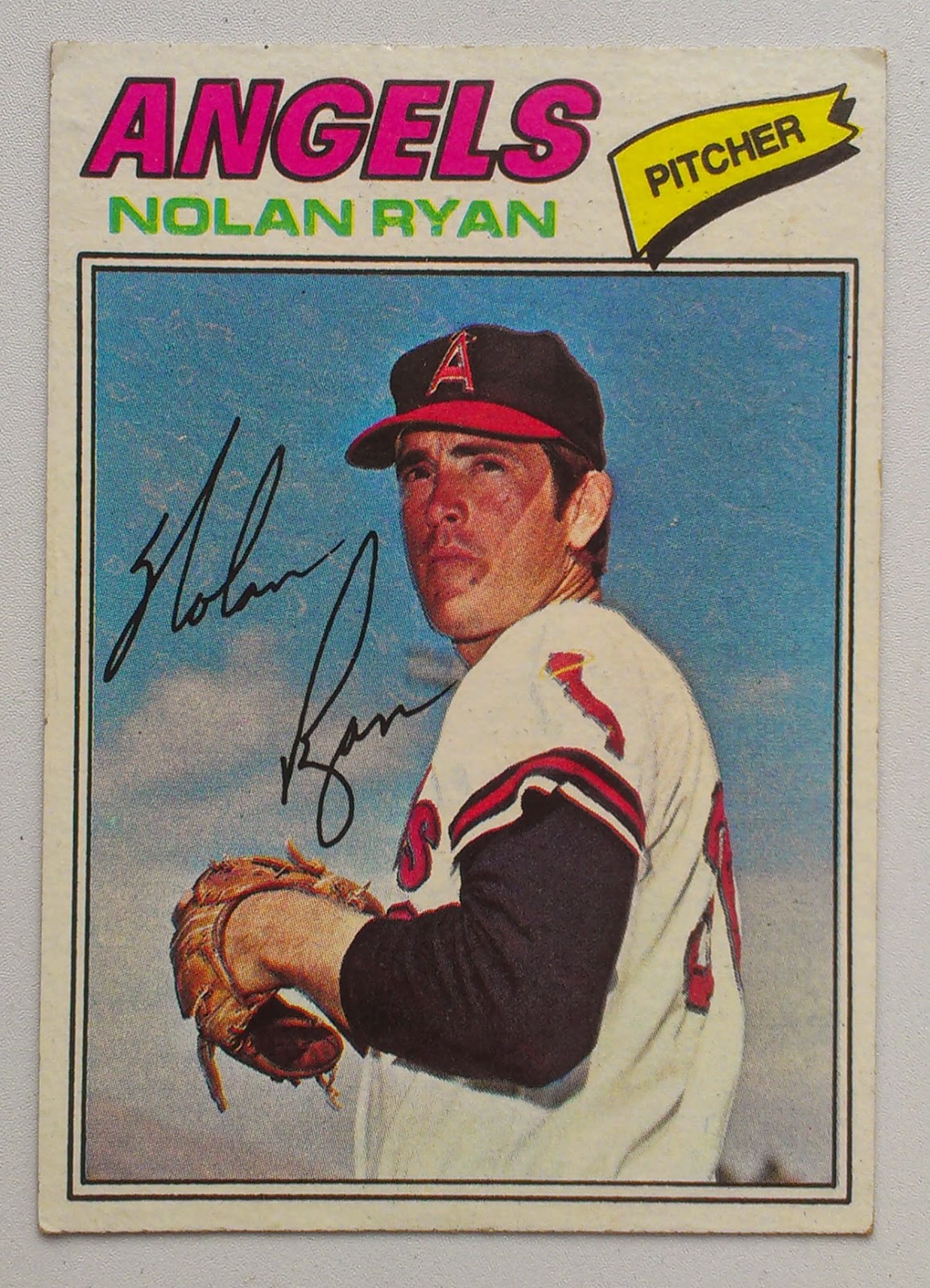 We have had a couple of posts here that have casually mentioned Ryan cards but we really haven't dedicated a post to a single one of his cards.

Nolan Ryan is very popular with collectors, fortunately he played for an eon so there are a great many of his cards available. To me Ryan is an Angel, this is despite the fact that he spent more years with Houston, and that he faced the Phillies in a memorable NLCS as a member of the Astros. However the memories of our youth persist and Nolan Ryan was an Angel during my early years. It is also with the then California Angels where the Ryan Express was the most dominant. Seven of his eleven strikeout titles were while he was pitching for the Angels.  Oddly he never took home a Cy Young award - his best finish was 2nd in 1973.

Ryan remained with the Angles through 1979 before leaving for Houston via Free Agency. In 1988 He moved across Texas to pitch for the Rangers.

Topps issued 10 cards of Nolan Ryan as an Angel the first of which was 1972 Topps #595 (Hi Number). The card back mentions an incredibly dominant game that Ryan had as a member of the Mets at the expense of the Phillies. His final Angels Card is 1980T #580 which features a fine action shot and it's flip mentions Ryan's famous 100.9 mph velocity.

Nolan Ryan's first Topps Ranger card was produced in 1990, he was featured five years through his retirement in 1994. The first five cards of the 1990 Topps honor Nolan Ryan.  Card #1 is his base cards while cards #2-5 are dedicated to the pitcher reaching the 5000 strikeout milestone. Each of the four cards represents a different era and team: Mets, Angels, Astros, and Rangers.

Topps then gave Ryan the honor of the #1 spot each of the next two season. I will need to check, but I think that makes him the only player to get the set debut spot in three consecutive years. In 1993 He is on Hero #700. Finally in 1994 Topps gave Ryan his Uniform Number #34 for his final card. The Card also features a special 27 seasons logo.

1977 Topps
I am not positive of this but I think this card is from the Phungo 1.0 collection. At one time I probably had 80%-90% of the 1977T set. It is easily the set that I bought the most of when I was a kid. Most of those cards are long gone, and I have very few cards from that set today. If I see them at a show I rarely pick them up.