This weekend will mark the 50th anniversary of Jim Bunning's Perfect Game. 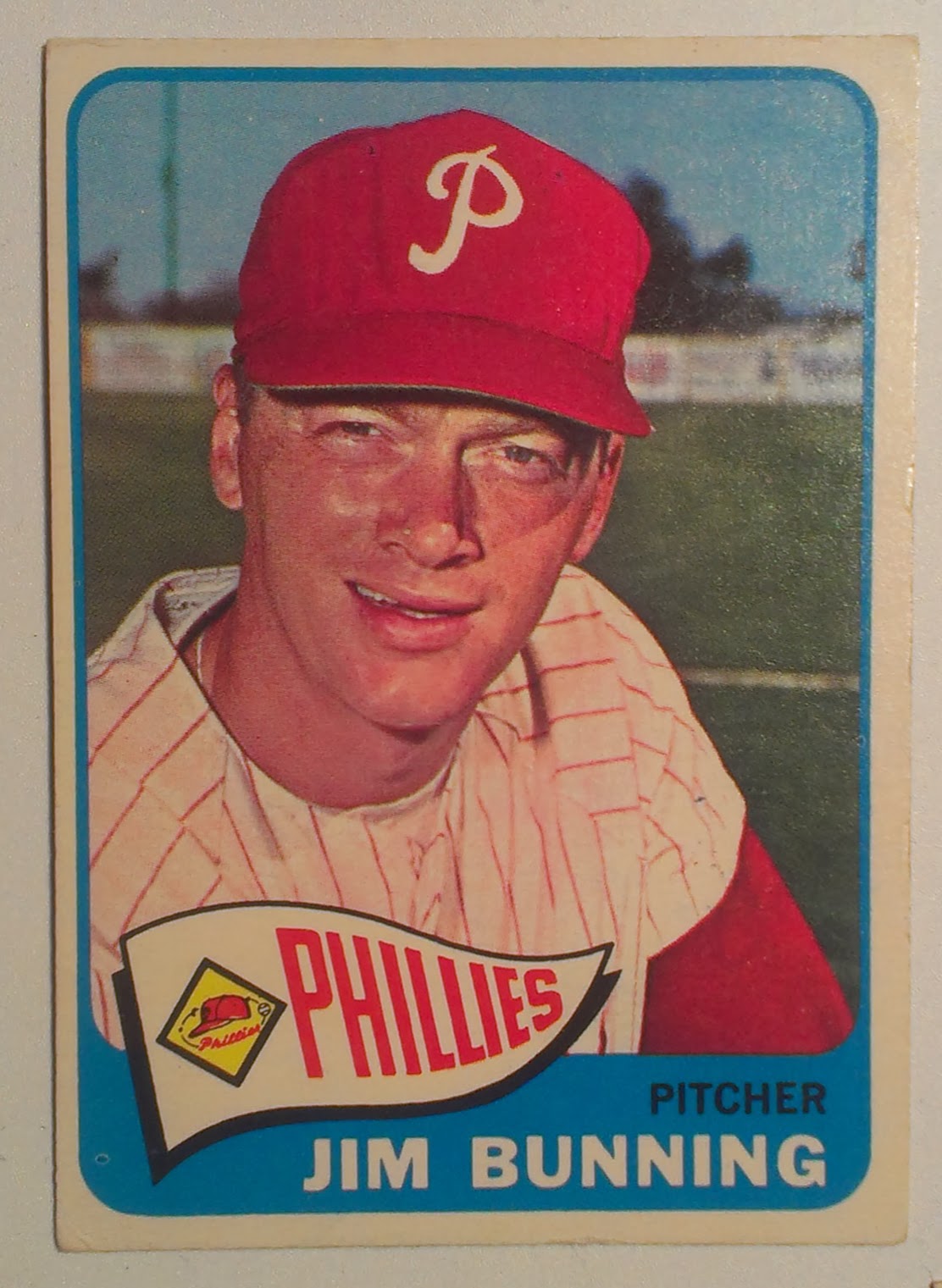 On Father's Day, Sunday June 21, 1964 the Philllies beat the Mets 6-0 at Shea Stadium. The Future Hall of Famer struck out 10 Mets in the contest finishing out with a pair of K's versus Pinch Hitters George Altman and John Stephenson. It was the first Perfect Game pitched since Don Larsen tossed one in the 1956 World Series and the first NL perfect game pitched since 1880.

The perfect game was Bunning's second no-hitter. As a Tiger he had no-hit Ted Williams and the Boston Red Sox in 1958.

After his playing career Jim Bunning went on to represent the State of Kentucky in the US Senate. He likely got his taste for politics when as a player he was involved in the development of the players union.

2014 Heritage
Earlier this year we ran off a bunch of postings related to 2014 Heritage and the related original 1965 Topps. As the second half of this feature I intended to take a closer look at Heritage, but still haven't gotten that started. I will mention here that Heritage likes to give a nod to the earlier set by sharing card numbers with similar players. Jim Bunning's modern day partner on card #20 is Cliff Lee. That is a solid match Cliff Lee is on the shelf right now, but either he or Cole Hamels would have to be considered the team's ace.

Other Voices
The Great 1965 Topps Project

Sources
The Year of the Blue Snow
Baseball-ref
Baseball Hall of Fame
Posted by deal at 8:11 PM

This is a great card! This reminded me of a Jim Bunning giveaway that I got at a Phillies game a few years ago (maybe 2004?).

It was a 10" x 14" glossy poster, with his photo surrounded by all his Topps baseball cards. As soon as I find it, I will post it on my 1960s Baseball blog.

I agree, and you have reminded me that I wanted to make this card my Bunning HoF index. This one and the 1965T Callison just scream Baseball Player.

The back of the card has a cartoon about the perfect game.

...but that's not why I'm commenting. I noticed today that you and I have something in common - we're both being completely ignored by blogrolls.

The last post of yours that appears to show up is the "Team Features Index" from May 25th. My blog disappeared nearly 3 weeks ago.

I've been beating my head against the wall trying to figure this out. If I find anything that might help you out, I'll let you know.

Shlabotnik, hmmm - I don't think this is the case this time. the "Tema Features.." post is one that I wrote recently but backdated - I wanted to bury the post just for page usage.

The Blogroll does ignore Phungo Posts periodically, but I there appears to be no rhyme or reason as to when it happens. I think it only happens to those posts that I really want to get feedback on :)