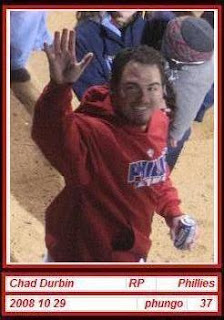 Last night Chad Durbin earned his 2nd save of the season by pitching a scoreless 12th inning versus the Cubs. It was a pretty intresting game involving 2 reigning division champs who are both potential playoff teams in 2009.

Cubs starter Rich Harden was perfect through 5 1/3 with a 2-0 lead when things just went awry for him. He gave up a walk to the 8 hitter (Carlos Ruiz) losing the perfect game. Later that inning he lost the no-hitter and shutout when he gave up a game tying homer to Jimmy Rollins.

The Cubs bullpen let them down in the eighth when Carlos Marmol walked in the go-ahead run after walking/HBP the bases loaded.

In the 9th Brad Lidge came on to get the save but could not convert when he walked the leadoff batter (Fukudome) who scored on a Milton Bradley single.

Finally in the 12th, newest Phillie, Ben Francisco hit a homer off Cubs closer Kevin Gregg to give the Phils the lead. Following that Chad Durbin shut down the Cubs and got the save.

It was only Durbin's 4th career save, 2 of which were of the 3 inning variety.

This is one of my favorite Phungo Cards. The photo was taken during the post game celebration of the 2008 World Series. I was standing in an area behind the centerfield bleachers above the bullpens. Durbin and Scott Eyre were out there gathering up dirt as souveniers and signing autographs - generally enjoying themselves. Someone called down to Chad as he was leaving the area - he looked up and waved and I got the shot.

I framed the shot to show that Chad is enjoying an adult bevarage. I think it is humourous that this guy just won the World Series and here he is drinking a light beer FROM A CAN. I am sure that it was all provided by a sponser but I still find it very funny.
Posted by deal at 12:44 PM

Nice card of Durbin. I got to see him pitch a few times at the beginning of the century with the Royals. I'm glad that he is still pitching and has himself a ring.

Great card! Just thinking back to that night gives me goose bumps.