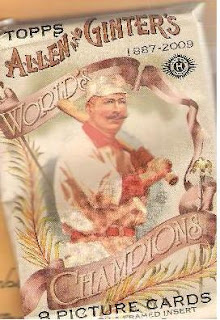 Dave over at Tribe Cards hosted a great box break that was right in my wheelhouse. For a mere $5 one could get all the cards of a certain team out of a Hobby Box of Allen & Ginter. I obviously picked the Phils and was very happy with the results.


Love the Cole Mini and nice to get the A&G back Moyer mini also. The remainder of the PHils included Chase Utley, Jayson Werth, Jamie Moyer Base Card and Brett Myers.

There are obviously cards in Allen Ginter that are not associated with any team. These were divided randomly amongst the break participants. 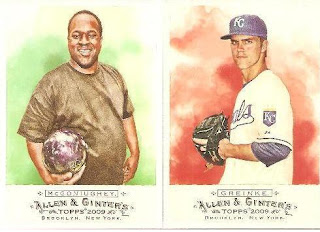 And some teams were unclaimed - that is how KC Royal Greinke ended up in the Phungo Collection. Bringham Young and Justin Moreneau were some of the other bonus cards that were sent my way.

Dave did a tremendous job as usual with the break. He went the extra mile by reinserting the cards in an Allen Ginter wrapper (pictured above) which gave me the excitement of opening a pack. He also designed a Special Tribe Cards Allen Ginter Return Addy sticker:

Thanks again, and good luck to the Indians - 2009 looks shot, but hopefully some of the former Phils prospects will be able to contribute to Clevelands Future.
Posted by deal at 12:11 PM