Phungo Cards - The Phuture is Now

A year ago three Players represented the Phillies at the MLB Futures game: Lou Marson, Carlos Carrasco and Jason Donald. 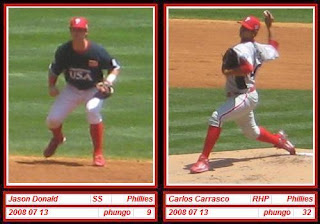 Last week all three of those players along with pitching prospect Jason Knapp were traded to the Cleveland Indians for Cliff Lee.

The Phils are currently somewhat prospect rich and they could afford the trade player wise. I am happy to have Cliff Lee on board, but I will also miss the homegrown prospects that I have been hearing about and following these last few years. The three prospects were likely not going to factor significantly into the Phils plans this year or next. Things happen quickly in sports and baseball, soon the Phils young core of talent will be aging. There best opportunity to win is now and I am glad to see the organization is going after the type of talent that can help the players that are there succeed.

Both the Phungo Cards feature photos taken at the 07 futures game and the cards are dated as such. It was a great day and I am surprised I didn't take more photos, but I hadn't really gotten the phungo card idea in my head yet at the time. Neither card number is significant, I think other than maybe I had high hopes for Carrasco and gave him Steve Carlton's number - that would have been extremely presumptious.
Posted by deal at 7:50 PM