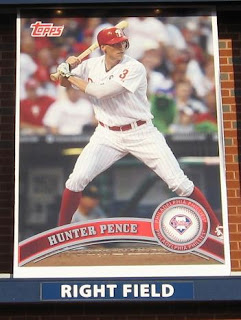 This is the giant Topps Hunter Pence card that was posted as part of the teams Starting Line Up feature at the ballpark.  I was happy to see the Phils and Topps elected to move up to the 2011 design, they have elected to skip some years.  Pence joined the Phils after Series 2 came out, I am not sure but I suppose this could be what the Pence 2011 Topps S3 card could look like.

This card was posted when we were at the game on Wednesday night - The Phils won 9-2, Pence had a couple of hits including a double and score 3 runs.  Cliff Lee got the had another good start and recorded his 13th win.  Jimmy Rollins had a lead off dinger for the Phils.  Rookie HR sensation Paul Goldschmidt went deep for the bad guys.
Posted by deal at 9:55 PM

I was visiting in Philly a few weeks ago (just before the earthquake) and was happy to find a Pence Phillies shirt without hardly trying.