The film version of Michael Lewis' book "Moneyball" is scheduled to come out September 23rd of this year.  I suppose they may have had trouble getting the film made, as the timing seems a bit dated.  It is getting hard to pretend that the Oakland A's can still win while playing less. Regardless many baseball fans have read the book and even the most casual fans understand the difference between On Base Percentage and Batting Average.

With the release of the upcoming film I thought it would be fun to take a look back at the book and the changes in the way Baseball teams are built, since the 2002 draft that is prominently featured in "Moneyball".  I am in the processes of rereading the fine book and hope to come up with some baseball and card related posts from the material.

Of course the main character of Moneyball is Billy Beane.  Overall I loved reading Moneyball, but I never viewed Beane as a baseball genius.  I believe the Athletics won because they had 3 really talented pitchers.  All the OBP studs that Beane picked up were decent players but Zito Hudson and Mulder were the reason they made the playoff year in and year out. 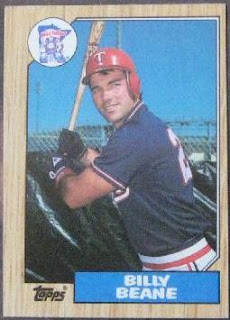 This off center 1987 gem is one of the few cards from the ubiquitous set that I have sleeved.  I enjoy cards that only become noteworthy long after the players career is over and this one definitely fits that description.  Brad Pitt plays Beane in the film - I look forward to seeing this card with Pitt in that Twins uniform.

Here is a link to a Moneyball and Collecting related article in Beckett that I first saw referenced by Chris Olds via Twitter.
Posted by deal at 8:33 PM