The Hall of Fame Profile posts are not restricted to the Hall in Cooperstown.  I also try and hit the various other Halls with a heavy dose of the Philly Sports Hall of Fame.  When I originally ran the Hall of Fame Thursday feature I chronicled the entire Philly Sports HoF 2008 class.  Today I would like to feature a member of the 09 Class Bobby Shantz.
Shantz played half of his 16 year career with the Athletics - including 6 while the A's were based in Philadelphia.  He finished his career pitching a handful of innings for the ill-fated 1964 Phillies. Shantz's Best year was his MVP season of 1952 which is memorably featured in the 1975 Topps MVP subset with a reprint of his card from the seminal 52 set.  Shantz also has eight Gold Gloves on his mantle - He appared on the losing side of two World Series matchups as a pitcher for the Yankees.
Bobby Shantz is still kicking at 85 years old.  He lives in the Philadelphia area and I see his name pop up frequently for autograph and card shows.
For the Collector
One of the vintage subsets I really like is the 1961 Topps MVP series. 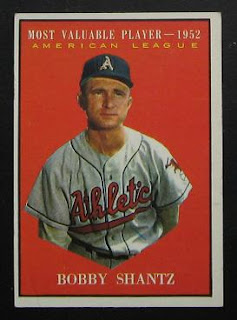 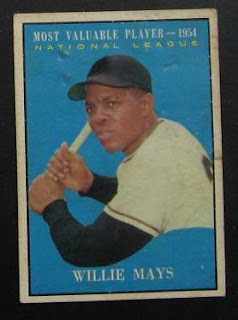