The Phillies Annual Alumni Weekend is upon us.  Unfortunatley Team Phungo will not be able to make the festivities this year, but I strongty encourage you to go, whether your a Phils fan or Baseball fan in general.  I have enjoyed the Alumni weekends I have been to in the past and they will likely always remain on my todo list. 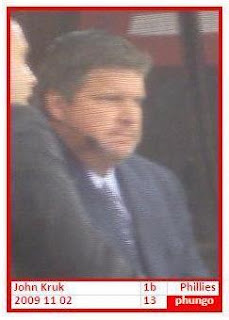 2010 Phungo #13 John Kruk
On Friday Night the Phils are inducting fan favorite and ESPN analyst John Kruk into the Wall of Fame.  Saturday Night will feature the return of dozens of Phils players from the past.  The Phils typically have a couple of former players signing autographs throughout the stadium during the entier weekend.  Past signers have included Mickey Morandini, Jim Eisenreich, and Mike Lieberthal.
Among the players expected to return for Saturday night are all 3 of the Phils living Hall of Famers:  Mike Schmidt, Steve Carlton, and Jim Bunning.
The big event on Sunday is the unveiling of a statue honoring Harry Kalas - I am sure this will be a joyful and emotional moment for many Phillies Fans.
For the Phillies press release for the weekend click here.
For a look back at the Phils 2009 Alumni Weekend click here.
Posted by deal at 8:23 AM