Bummed out to hear rumors of Kerry Wood retiring.  Something about a guy coming up with so much hype and he really answered the bell in the beginning - He was a key guy with the early 2000s Cubs teams that came so close to breaking the curse, but injuries just hampered a "what could have been" career.

And there will always be The Kerry Wood Game. 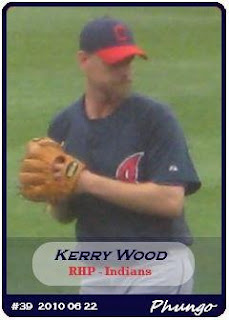 There are dozens perhaps hundreds of Kerry Woods scattered across Baseball History.  Stephen Strasburg could have a Hall of Famer career, he could also have a Kerry Wood career.

Phungo Card
Blurry photo above taken prior to a game in 2010 where Wood got an inning of solid relief in during an Indians 2-1 loss to the Phillies.
Posted by deal at 11:17 AM