Swag from O No!!!, Another Orioles Blog

I desperately need to get caught up on trade posts, and will try and knock out a bunch of them in the next couple o weeks.  This unfortunately means that I will likely not dedicate the time and effort to them that they deserve.
Today we are looking at some cards I received way back in April from Ryan over at O No!!! Another Orioles Blog 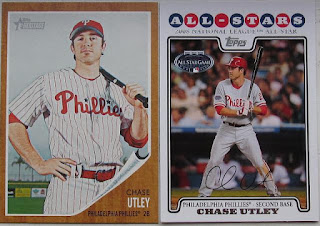 2008 Topps Update #UH241 Chase Utley
2011 Topps Heritage #77 Chase Utley
Chase took ground balls during BP today for the Phillies.  We are past the quarter pole in the 2012 season and the Phils haven't seen either Utley nor Ryan Howard.  Hope we hear from the soon.
The two cards above are just a pair of the many cards that Ryan sent over.  He knocked out several cards off my Phillies checkers,  and another pile of cards from the 2011 Heritage set. 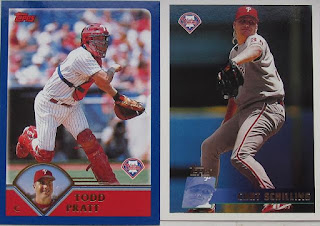 Big Old Stack of 2011 Topps Heritage
The 2011 Topps Heritage is a set that I am buiding by default, partially in the name of journalistic research delving into potential hot-boxes in last years set.  FYI I did not get a hot box.
For a look at my 2011 Topps Heritage Want List Click Here
My Phils Topps 1980s Collection Want List is Here.
For access to all my want lists click here
Posted by deal at 8:21 PM