Today less is more and we have a special Phungo 4 edition of P5 with Braves authority Cardboard Junkie.  This may be hard for some readers to believe but DayF went into an extended rant on Q5 and I felt it warranted a separate posting.  Today we will handle the first Four Qs. 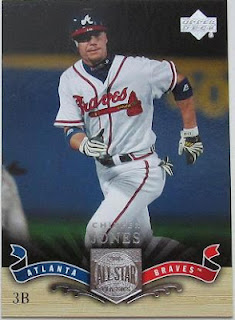 1) Do you have a date on your calendar when you intend to catch one
last Braves game with Chipper Jones?> I don't have a specific date picked out yet, but I have already paid
> for two vouchers for games, I got four tickets for a game from my
> uncle for Christmas and my father in law wants to go to a game. I
> should have plenty of chances to see Chipper as long as his knee
> cooperates. I am seriously thinking about going on August 16th, which
> is Chipper Jones bobble head night.

2) Which would you rather draw an active or retired player?> I think I prefer drawing retired players. Reference photos for them
> are easy to come by and usually more interesting. Black & White photos
> are easier to sketch as well. I can think of a bunch of old-timers I'd
> like to draw off the top of my head - Yogi, Mossi, Hank, Ruth, Bouton,
> Cookie, Lemmer, Winfield... I often use cards as references and the
> portrait photos from the '80s and earlier are much better than the
> photos today. Today's cards have some great action shots but are lousy
> portraits.


3) The Return of 2012 Topps Archives - Interesting Idea or have we had
enough of RetroTopps?> I've always been a fan of the Archives set and I have either completed
> or gotten over 90% of the previous sets. However, Topps showed off an
> uncut sheet on Twitter a while back (image attached) and there are an
> AWFUL lot of repeat cards from the previous sets. If I collect it at
> all this year I'll probably just buy a complete set, but I do look
> forward to more autographs from retired players. Apparently Dale
> Murphy signed a bunch of cards recently!


4) Which Braves hitter is going to get to the Phillies Pitching in
this series?> Jason Heyward is a beast and Freddie Freeman is on fire right now. The
> guy you should be absolutely terrified of though is Chipper Jones.
> It's his last season, he knows it and he's on a mission. Hurt his
> knee, hits a homer on his first game of the season. Hurt his knee
> again, hit another homer when he came back. 40th birthday? Homer. Last
> game in Dodger stadium? Game winning RBI. If the Braves are somehow
> able to make it to the World Series, he's going to end up walking away
> with the MVP, I'm sure of it.


We will hand out a 3 for 3 for today - DayF has really covered his bases on the last question pretty much naming every Brave other than Jerry Royster, we will wait on the seris outcome to see if any of these players get to the Phils this week.
Looking forward to seeing the Don Mossi Sketch card - I see it being one big ear.  And looking forward to a report on that Bobblehead Night if it falls together.
Looking Back
Cardboard Junkie 2010
Cardboard Junkie 2009
2012 Phungo 5 PostingsPhiladelphia Phillies - The Phillies Room.
Miami Marlins - 30-Year Old Cardboard
New York Mets - Paul's Random Baseball Stuff
Chicago Cubs - Wrigley Wax
Pittsburgh Pirates - Pirates Treasure Room
San Diego Padres - Padrographs
Oakland A's - The Fuji Chronicles
Seattle Mariners - Emeral City Diamond Gems
Texas Rangers - Play at the Plate
Posted by deal at 8:16 PM

Is it too early to give dayf credit for #4? Chipper went off in extras last night!

I was just about to ding Dayf for that one - everybody except Chipper got involved in that game. And then or course Chipper beats them. Very emotional gm - Great gm if you come out on the W side.