On Wednesday night Jamie Moyer earned another win resetting his own record of holding the distinction of being the oldest player to win a Major League ballgame AND he set a record with his BAT by recording an RBI an RBI - which has never been done by anyone older.

Today I want to take a look at an event on the other end of Jamie's career that involved a Future Hall of Famer who also recently reached an age plateau. 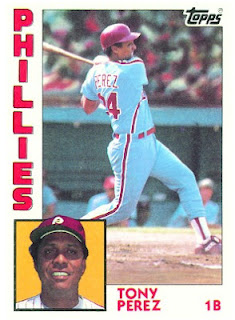 On Monday 5/14/2012 Tony Perez celebrated his 70th birthday.  Here comes your Phun Phact - Jamie Moyer once pitched to Tony Perez - recording 3 Outs vs the Future Hall of Famer while recording a 3-2 victory in August of 1986.

Moyer has pitched to batters whose birth years have ranged from 1942 to 1990 (Starlin Castro).