This one is no fun for me.  If I had an HoF vote it would be no. Not on the first ballot and likely not ever.

Curt Schilling is a borderline for regular season numbers with many outstading playoff and World Series performances. You probably know all this and already have an opinion on Schilling - Which likely is based at least partially on his off the field persona and oddly for his generation has nothing to do with steroids. 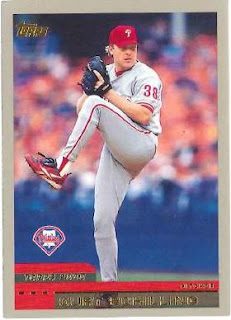 Not discussing Schilling does give me an opportunity to discuss 2000 Topps however.

One of the things I hear regarding foil on cards in recent years is that it doesn't scan well.  Is that really a legitimage complaint.  If the card looks ok out of the pack and you can read the name why should the readability of the players name on a scan be a design flaw. Peoiple will mention that "3-D" cards don't scan well, but the complaint will be it is a stupid idea not a dumb design.

I rather like 2000 Topps - minimalist, but contains all the pertinent info you would like to see on a baseball card. Team Colors and a modest team logo. It isn't a set that will make the Topps all-time list but it is more then adequate.