I have caught a Home Run ball on the fly.

It was a Batting Practice Home Run ball. ...

But, for me it counts.  That ball was hit by Kenny Lofton. 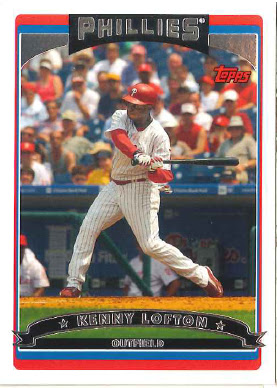 2006 Topps #97 Kenny Lofton
That fact alone makes Kenny Lofton a Hall of Famer to me.  Not sure if it will be enough for the BBWAA.

Lofton was a member of the 2005 Phillies.  He had a good season batting .335 over 110 games.  The Phillies were one of 11 teams for whom Lofton played during a 17 year career.  He is likely best known for his jaw dropping catches while manning centerfield for the Cleveland Indians.

He was an excellent leadoff hitter for most of his career and Lofton's numbers are right on the edge of Hall Worthy.  Unfortunately for the most part they are just a tick under Tim Raines who the voters have yet to put in the Hall of Fame.

I think Lofton will get some consideration over the next several years.  I see him staying on the ballot for several years perhaps gettting in at the end of his eligibilty which will be in 2028 using present rules.