Today marks the 40th anniversary of Roberto Clemente's death in a plane crash off the coast of Puerto Rico. 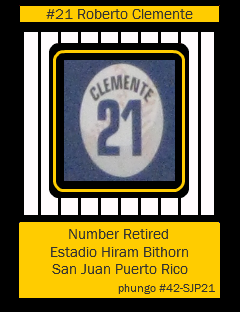 Clemente died before I had a concept of baseball, life or death. However is legacy is important to both the Latin Americans and to baseball.

I have jumped the gun a bit on the 2013 Phungo card release in order to honor Clemente today. This is his retired number not from Pittsburgh, but from Hiram Bithorn Stadium in San Juan Puerto Rico. I am pretty sure that his number #21 is honored and retired across the entire commonwealth of Puerto Rico.

This is another first for Phungo Cards.  There have been other retired numbers in the series but this is the first one from outside of Major League Baseball.  The Photo was taken during the 2009 World Baseball Classic.

Enjoy your New Year's Eve safely and think about Roberto Clemente he spent his last New Year's Eve trying to help needy people after an earthquake in Nicaragua.