The Hall of Fame ballot for the 2013 have been cast.  There is much debate about the high profile candidates like Bonds Sosa and Clemens.

I know I won't get through them all, but I would like to begin a short series hitting all of the players on this years ballot that log time with the Phils.  I am thinking these posts won't always be about the player and his credentials - more often I will discuss a specific card or set, His Phils Tenure, or maybe some odd event involving the player.

Today we start at the bottom of the Ballot with Jose Mesa. 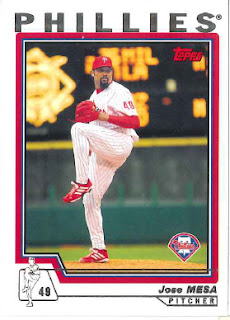 Sometimes referred to as Joey Table.  The Phillies were one of eight ballclubs for which Mesa played.  He was the teams principal closer from 2001-  2003.  During that era he recorded 111 of his career 321 saves.

I am quite fond of 2004 Topps.  The foiled "etching" of the player pix in the bottom left hand corner is unique to the 04 Topps set.  Also I don't think the player numbers have occurred on the A-side of another Topps Set. Player Name Team Name and Position are all displayed in a neat clean fashioin. A small team logo is present and not overbearing.


All those simple foil lines running across the bottom of the card hold a bit of resememblence to the teaser images we have seen of 2013 Topps.