Team Phungo picked up our first Pack of 2013 Topps last week and here are the contents: 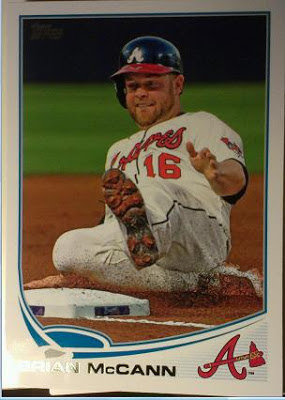 When I first saw the 13 Topps design an eon ago, my first thought was way to white  - I have warmed up to the design since then - I don't know why Topps ignored the position for the 2nd straight year, but otherwise it is a good look.

I apologize for the remaining scans - experimenting w/ new smart phone - and I think I am too dumb to use it. 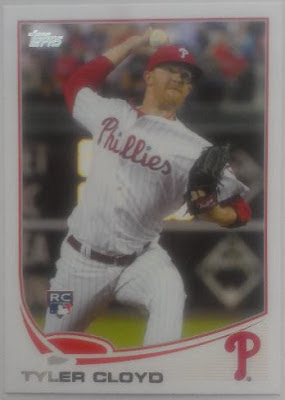 One of the Phils 2012 rookies. Cloyd was something like 14-1 in AAA last season before his callup.   He was more mediocre at the major league level.  The Photo on this card is from Cloyd's major league debut on 2012-08-29.  I figured that out by checking out the scoreboard behind Cloyd.  8/29 was the only time Tyler pitched when the Tigers visited KC. 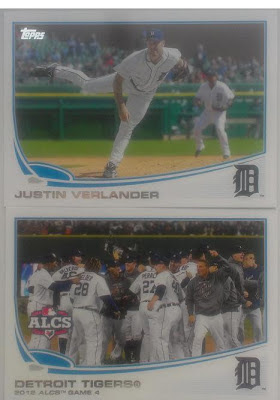 If this pack was made for anyone it was Tigers Fans.  Picked up both their Ace and the ALCS card.  Verlander's card number is his also his jersey number. 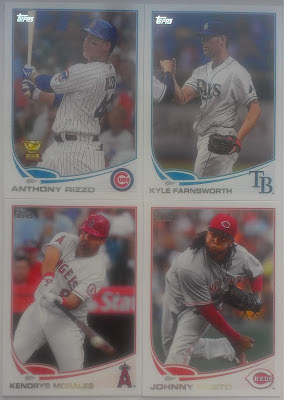 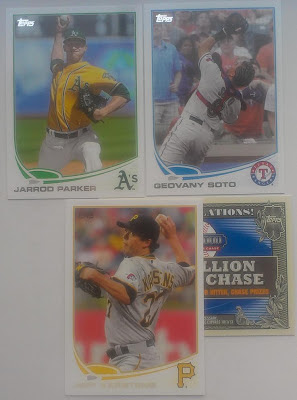 The Soto card may look like one but as far as I know it isn't one of those crazy out of bounds SP variations. Topps produced an OOB SP for Anthony Rizzo but this isn't the SP, this is his base card.

The Verdict
As noted above, it is a decent design. Much better then 2012. In addition to this single pack I also bought a hanger pack. In general I am not building new sets right now - but I do like having a few cards and inserts from each year. For Topps sets I am not building I have been building a team rep set - 1 card for each MLB team. That is what I intend to do with 2013 Topps.  I am not sure if the hanger pack will fulfill that goal.  I will likely pick up a pack or 2 of S2 and Update as the card season continues.

If the Parker is or becomes available, I definitely need it.