Ok we have a couple of weeks to go gaga over 2013 Topps. In today's 72 hour news cycle world it is well beyond time to move on - well except for that Pete Rose blip last week.

We have about two weeks to prepare for the onslaught of 2013 Topps Heritage. I will once again embark on a project that I do not know if I will finish, but wanted to look back at the original 1964 Topps upon which 2013 Heritage is based. 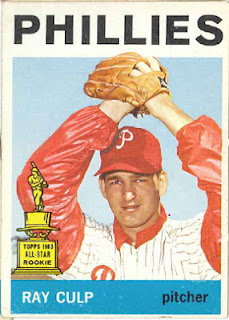 1964 Topps is the first set I encountered as an adult collector that I was unaware of as a kid. When I first saw it at my first returning collector card show, I winced.  It was just to boring.  Since that day in probably 2006 or 2007 the design has grown on me a bit, but I still typically bypass the cards from this set when I come across them in a mixed bin.

I would think 1964T is for the collectors that lean towards minimalist design. The design is more than functional with team name prominently displayed across the top and a player nameplate with position on the bottom. Topps gave the Phils the blue nameplate which works as a complimentry color to the red team colors. I am not nuts about the black lettering for the team name which is a bit bland.

The Player photo is pretty large for the era and I do llike the way the caps (or glove in Ray Culp's case) bleeds from the photo above frame into the team name. There is a likely a graphic design term for this - for whatever reasons it is a concept that Topps has gotten away from - it does show up sparingly in 2010 Topps but you have to look. So yes we have had about 20 consecutive years of chrome but no overbleed photography.  Lets mix it up Topps.

Caps Above the Line 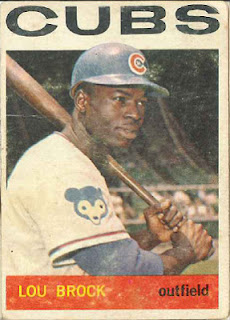 Here ia a favorite 64T card in the Phungo HoF collection. I liked Lou Brock as a kid for a variety of reasons. I am also a fan of cards of players on teams other then the one for which they are best known. Brock was traded in the middle of the 1964 Season - this is his last card as a Cub. The Cubs are represented by at least 4 Hall of Fame players in 1964 Topps - Brock, Ron Santo, Billie Williams, and Ernie Banks.

The 64 Topps Lou Brock Card is a fine example of the cap reaching into the Team Name portion of the card. There is a lot to like about the shot.  I particularly like the Cubs logo on the uni sleeve. 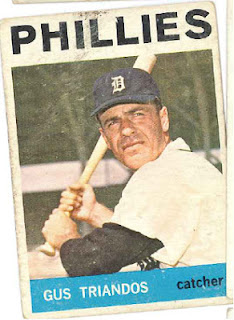 I wonder if Topps will photoshop free agent/traded players in 2013 Heritage.  In the original 1964T set they simply left players in their old caps while changing the team name on the card.  I would like to see Topps stick to the 1964 format in 2013. The Phils even conveniently picked up a Detroit Tigers player in Delmon Young for 2013 which would make it real easy for Topps to rhyme a Heritage card with this Gus Triandos 1964 Topps original.

Looking ahead
I am working on a look at the 1964 Topps Rookie Cards - hopefully we will have a posting ready for Wednesday.