some of the team cards for 1964 Topps seem to be taken at an extreme distance - The Reds card below isn't so bad but the Phillies card looks like they are in a room down the hall. 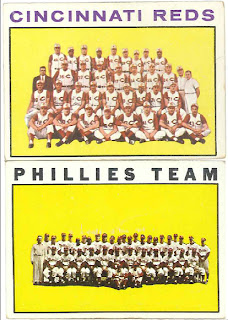 Notice anything else odd about these two cards.  The Phils are titled "PHILLIES TEAM" while the "CINCNNATI REDS" get the full name and nickname treatment.  It appears that the Phils as well as several other teams in one of the middle series of 1964 Topps are given the nickname-team treatment while the lower and hi series cards get the more traditional full team name.

It will be interesting to see if Topps carries this through in Heritage. I doubt this will happen due to copyright issues or some other legality, regardless we will find out in a week.

Here is a breakdown of how the cards are titled in 1964 Topps.

Nickname Only
293 Phillies
318 Twins
343 Senators
Full Team name
27 Mets
87 Cardinals
132 Braves
151 Athletics
172 Indians
213 Angels
237 Cubs
257 Giants
...
373 Pirates
403 Reds
433 Yankees
473 Orioles
496 White Sox
531 Dodgers
579 Red
Oddly the two teams that are Identified as nickname-team are the Twins and Senators - Which are teams that are connected because the Twins were once the Senators. Apparently among the variations in 2013 Topps Heritage are cards of Nationals players labeled as Senators.

My guess is that the "XX Team" cards are due to space limitations. They probably couldn't fit "Philadelphia Phillies" or "Washington Senators". They saved space on some of the other longer names by abbreviating (K.C. instead of Kansas City) or shrinking the font size a little.

Will be interesting to see what Topps does. They also need room on the Heritage cards for the TM or copyright symbol, which wasn't needed back in '64.

Just to add something, the original Washington Senators (that became the Twins), in the era of Walter Johnson, were known interchangably as the Senators and Nationals.