In my opionion 1964 Topps has a terribly ugly flip side. 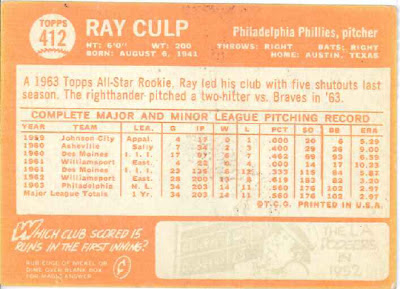 The ugly part for me is that creamsicle orange.  There have been a few other Topps issues with orange backs, but they are typically a bit darker.  This light orange is just yucky looking to me.

The rest of the b-side is fine. Minor and Major league stats, Bio info and a brief passage regarding the player.  Can you imagine the buzz a rookie pitcher would get if he tossed 5 shutouts in his rookie campaign?

One really interesting aspect of 1964 Topps b-side is the trivia question with the scratch off answer. Anxious to find out how Topps Heritage handles this.  It adds a bit of expense to create the card, and I am not sure that collectors will want to deface their cards.

Curisously 15 first inning runs is not the record. In 1894 the Boston Beaneaters had a 16 run first.  The Dodgers put the 15 spot on the Reds in a game on May 21, 1952.  At one point in that first inning the Dodgers had 14 consecutive batters reach base.

Sloppy Topps
And here we have a sloppy topps candidate.  The Dodgers didn't move to Los Angeles until 1958 so there is a bit of an inaccuracy in the trivia answer.  Good thing there weren't card blogs forums and twitter to back Topps for shoddy Quality Control in 1964.