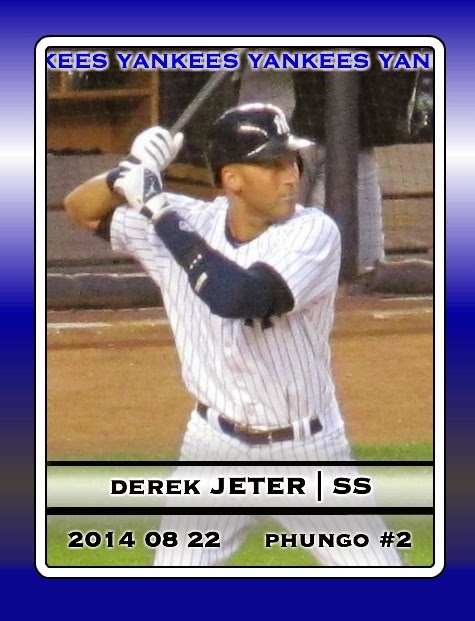 Rather than give Jeter #1 (which went to Cole Hamels). We did give the Captain his uniform number - which is pretty common in Phungo. This is an idea which Topps went with in in 2013, many collectors disagreed with the approach.

Putting together Yankees cards can give me trouble. The black/blue team color is pretty dark and can really hurt the look of a card. When I did the fade for the 2015 borders I elected to put the bulk of the card in a team color with a 2nd team color blended a third of the way from the bottom. Opposite the bottom fade I did something similar at the top third mark, using white this time. This brightens up the card regardless of team color. The top 1/3 mark also pulls a focal to the players face on most cards. The focus for the lower fade becomes the player name plate.

So yes there is some thought that goes into what the cards look like. I put together a couple designs between now and April and try and settle on something early in the season. When actual games start being played all my attention turns to stockpiling photographs to be used on cards.

The photo on this card was taken on August 22 of last year, which is noted on the bottom left of the card. Team Phungo made a special trip to Yankee Stadium to see Jeter in front of his home crowd one last time. His game was uneventful, regardless it was worth the trek. I heard a lot of hate-buzz circling the Jeter Retirement Hype, however, I don't think it was significantly greater than the Ripken Hype I had seen in Baltimore a decade ago. For a full game report from our Final Jeter Game click here

2015 Topps
Some folks on Twitter took shots at Topps for making Derek Jeter the #1 card in the set. I don't see it, so what if he is retired. It is not unprecedented to see retired players in the flagship set and If they are great payers I have no problem placing them on the sets first card.