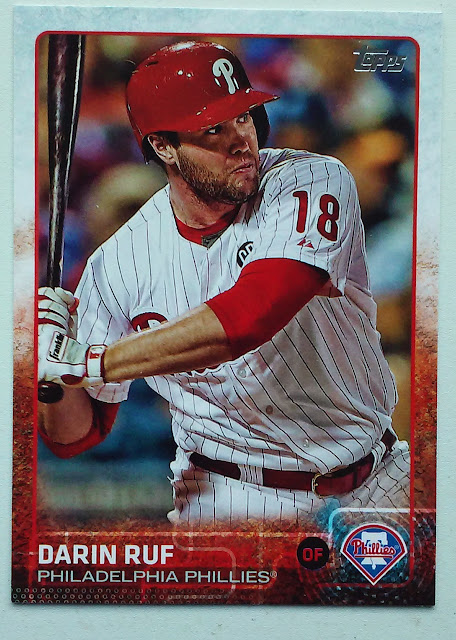 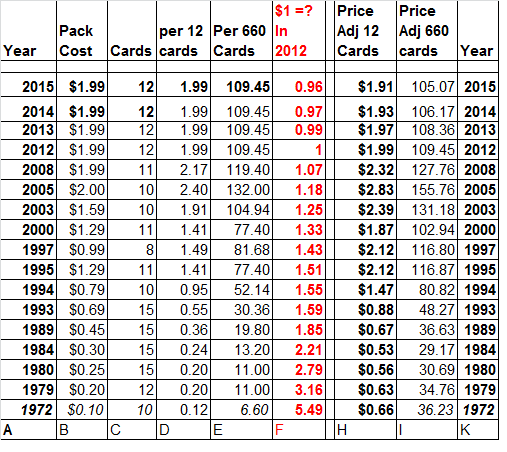 Key
Column B is the Price of a Pack in the referenced year.
Column C is the number of cards in that pack.
Column D is what a 12 card pack would cost (Everything is relative to 2012 Topps Cards)
In Column E I produce the cost for a 660 card set build from 12 card packs under perfect collation.  I used 660 cards as a constant because it was the basic set size in 2012.

Column H is the price of a 12 card pack with the inflation adjustment (product of columns D*F)
Column I is similar to H but for the 660 card set.

-While building a 660 card set would cost one about 3 times as much as it did in 1972, the price of building a set really hasn't changed since 1995.
-I understand there are inserts and possible collation issues. I say trade your inserts for base cards.
-The cost of 660 cards is slightly cheaper each of the last 2 years because Topps has maintained the  pack size and price point while inflation has been slight.

-Cards are cheaper then a decade ago by over 30%!!

-This is because Topps went from a 10 card pack to 12 card packs AND reduced the price
-Despite Topps obtaining a monopoly on the MLB license  prices have dropped 16% since 2008. This is a difference of over $20 when building a 660 card set.

I think your "cost per 660 cards" column is meaningless, because buying 660 cards by the pack (even in the years where the set size was 660) is not getting anyone a complete set. A better metric is price per card.

Yes, that is true - I don't even bother with Update/S3 here. That is an additional 330-350 cards these days. Column H give the estimate for 12 cards adjusted for inflation. These days we are paying roughly 3 times as much for a 12 card pack as we were in 1980.