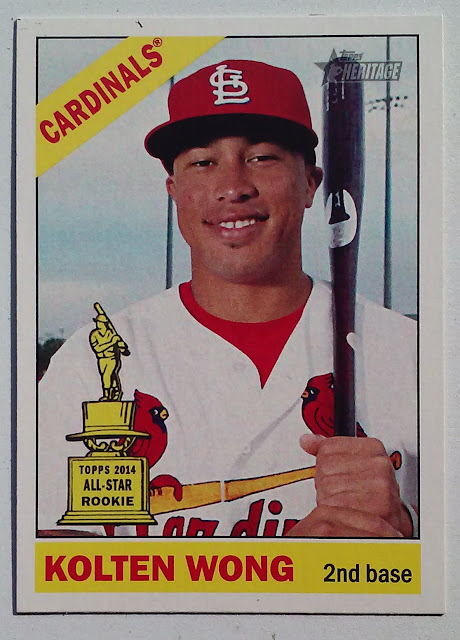 The Cardinals have a great next man up program, It seems like every time they call up a minor leaguer they are ready and it is often somebody that I hadn't heard of.

Kolten Wong was a bit more known than most of the Cardinals prospects, I had heard of him since at least 2013 when he appeared in the futures game at Citifield.

He may not be All-Star material yet, but Wong has been a productive player at a keystone position and at 24 has plenty of baseball in front of him. Last year He finished 3rd in the Rookie of the Year voting behind Jacob DeGrom (who he may face in the 2015 playoffs) and Speedster Billy Hamilton. 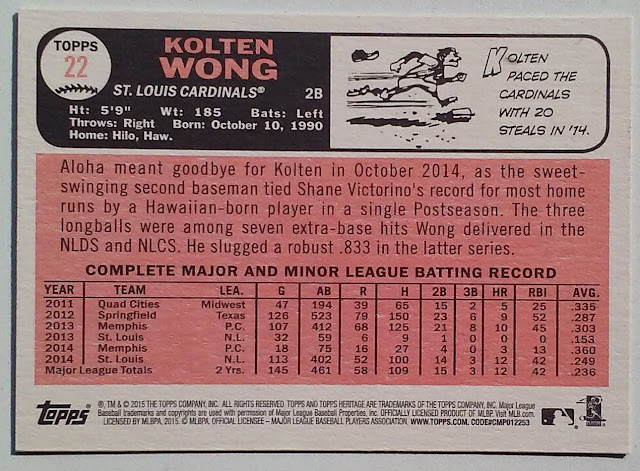 Nice to see Shane Victorino get repped on the b-side of Kolten Wong's card. Shane hit his 3 homers during the Phillies 2009 NL Championship campaign.

2015 Heritage
Not sure how Kolten Wong ended up on Card 22 in Heritage. The Original Slot was held down by back up outfielder Joe Nossek. The Cardinals Mid-1960s second baseman was Julian Javier - he lived at #436 in the 1966T set, a spot that Topps awarded to Justin Upton (as a Brave) in 2015.

My other thought was that Topps could have put Kolten Wong on card #195 which was occupied by the Rookie Cup second baseman in the 1966 set, Joe Morgan. Alternatively Topps could have matched that Iconic card with the Astros current stand out Jose Altuve - Of Course they did not - somehow Edinson Volquez got the nod.