If you want to Name the Game DON'T SCROLL BEYOND THE CARD!

Otherwise stay with us and I will discuss this card below. 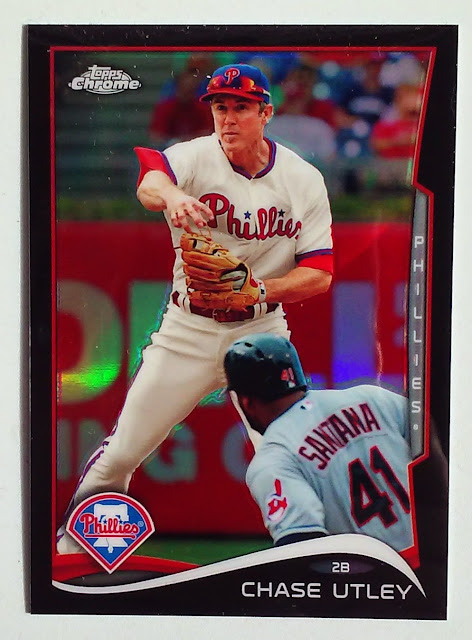 The Photo features Phungo favorite Chase Utley, it appears he is recording a putout on the front end of a possible double play with Cleveland Indians catcher Carlos Santana sliding into second base.

Chase is wearing the Phillies alternative cream jerseys which are reserved for day games. Those two facts point pretty quickly to a single game, a sad 10-4 loss on the 15th of May in 2013. If we look a little deeper we find the only time Santana reached base was in the 7th inning.  He was erased a pitch later on a 6-4-3 double play induced by Phillies pitcher Phillippe Aumont versus the Indian Ryan Raburn

Getty Got It
Once we established the date as a cross check we scanned the Getty Archive and found the image. Hovering the cursor over the photo yield the date and location information which confirms the 2013 05 15 date mentioned above. It also credits Hunter Martin as the Photographer.

One of the reasons this card caught my eye is that it is from a Phungo Game - A game attended by Team Phungo. For our dismal game report on that disaster click here. 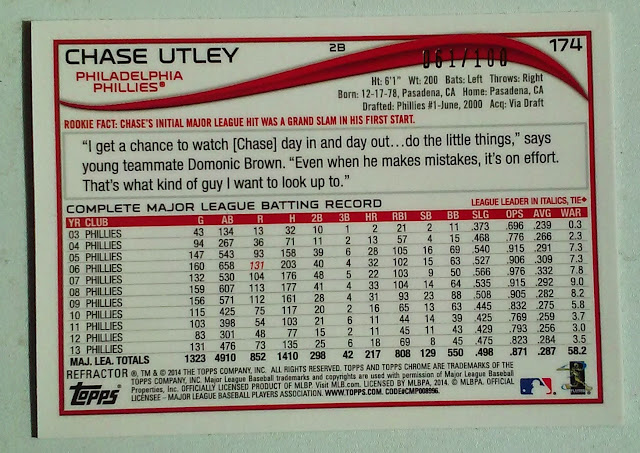 This is a parallel from the 2014 Chrome set. The black border refractor is a nice look for Phillies Cards - Nice contrast with the Red and having an Indians uni in the frame doesn't hurt. These parallels have a limited print run of 100 copies which can be seen in the top right corner.

To see the vanilla Utley Chrome card you can click here to see our blaster break from 2014.

Variations
In addition to all the parallels the Image also shows up on the mini variation of the 2014 Gypsy Queen Chase Utley card. An example can be seen in the Cardboard Connection Variation Guide - scroll down to card #255.