Each year I attempt to do an anniversary series on a theme, Previous subjects have included the 1964 Phillies and the 1976 All-Star Game.

This year we will be taking a look at the 1993 Phillies on the 25th Anniversary of their crazy fun National League Championship season.

I figure this may be one of the last times this teams is remembered. They happen to share their 5yr Anniversaries with the 2008 Phillies and the World Champions will always trump the NL Champs.

I have put together an index to link all the post and it can be found here with some of the players I hope to cover. 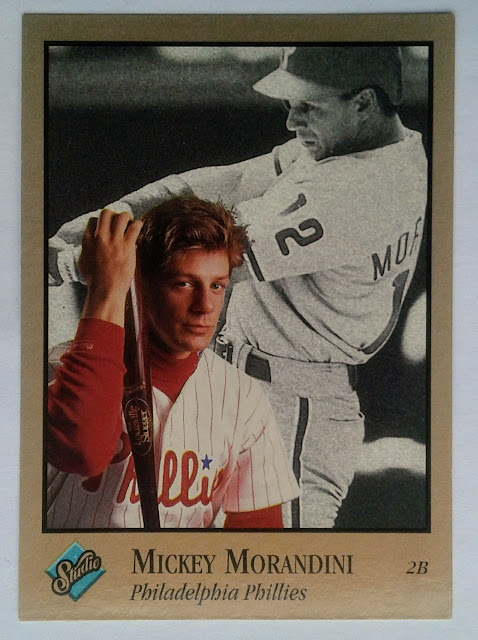 Mickey Morandini spent most of his career with the Phillies and returned to the team to coach after his playing days were over. The past two seasons Mickey has served as the clubs first base coach but is not expected return to the team in an on-field capacity this year. It appears that Morandini will remain with the club as a team ambassador. Morandini is 51 which seems a bit young to ease into a PR role, I think he will eventually end up taking a coaching position with a different organization.

As a fan I have many fond memories of Mickey Morandini the player. He played flawless defense and seemed to come up with a lot of big hits including one we will talk about below.

1992 Studio
I like the look of 1992 Studio a bit better then it's predecessor, The profile pix on a action shot background works better for me then the School Photo backdrop of 1991.

The classic minimalist front is not the reason I picked this card. 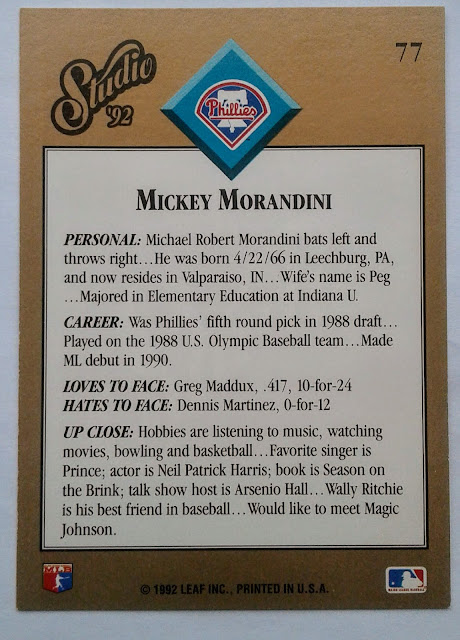 The Studio cards have a lot of fun info in the Up Close section for each player. I would love to see somebody do an entire series on this set. Some of the answers are timeless, On a different card Morandini listed his favorite players as Roberto Clemente. Others are planted firmly in the early 1990s - Arsenio Hall gets mentioned on a bunch of cards.

Morandini also mentions John Feinstein's fine book "A Season on the Brink" which followed Bobby Knight through a season at Indiana. Mickey played his college baseball for the Hoosiers and it is interesting to see his local interest. It is also notable that he majored in Elementary Education rather than kinesiology.

All that stuff is fun, but what really drew me to this card was one line:

This transitions us to October 13 1993, Game 6 of the NLCS. The Phillies hosted the Braves and their Ace Greg Maddux. Mickey Morandini batted #2 in the lineup and would have 2 very big ABs versus the future Hall of Famer. In the first inning Morandini lined a ball up the middle that lined off of Maddux' calf. Ultimately the Braves got the out, but I am inclined to believe that the contact hurt Maddux enough to affect his performance. You can see the AB at the 11:30 mark here.

The second big AB between the two occurs at 1:44:20 in the video. This is the sixth inning and the Phillies lead 4-1. Maddux walked Dykstra intentionally to get to Morandini.

Mickey Morandini followed with a hard fought At Bat that ended with a Triple down the Right Field line. The hit would chase Maddux and the Phillies took the contest 6-3 which advanced them to the World Series.

So yes Apparently Mickey Morandini did love to Face Greg Maddux. Good think for Mickey as he faced Maddux more than any other pitcher. His Master of the Braves star continued throughout his career. Over the course of 111 Plate Appearances Morandini batted .337 with a slugging number of .490. Only three batters collected more hits off of Maddux than Morandini: Craig Biggio, Tony Gwynn, and Luis Gonzalez. Among players that faced Maddux 100+ times the only player with a better average is Gwynn (.415 , .337)

Conversely Morandini never figured out Denny Martinez. He finished 1 of 22 versus El Presidente.