This year our first profile of a non-Phils HOF Candidate goes to Johnny Damon.

If you have been following the Ryan Thibodaux Hall of Fame vote tracker it is pretty obvious Johnny Damon is going to be a one and done candidate.

As of January 2 2018 Thibodaux had recorded 159 ballots, Johnny Damon received one vote. It was from Rick Telander who put together a complementary paragraph to justify his Damon selection.


He’ll never get in, but the guy thrilled many of us during those magical Red Sox-Yankees battles when the Theo Epstein-led Sox were emerging from their Cubs-like title drought. In 2002, Damon led the American League in triples. In 2004, he was second in the AL in runs scored. He sported wild hair and a lumberjack beard years before the latter became fashionable. I dug it. 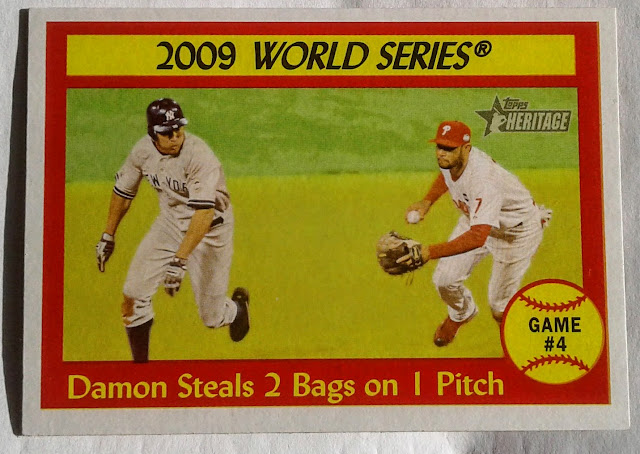 To honor Damon's career we pick a Topps Heritage card that shows off Johnny Damon's base running skills at the expense of the 2009 Phillies.

The play occurred during game four of the World Series. Damon came to the plate in the 9th inning of a 4-4 tie. There were 2 outs and nobody on base. He singled to left field to get the go-ahead run on base. The Phillies used a defensive shift versus Left-Handed batting Mark Teixeira. Damon stole 2nd on the first pitch easily beating a short throw from Phillies catcher Carlos Ruiz. Damon then popped up and took off towards an unguarded third base.

Damon would later score on an Alex Rodriguez double, the scoring did not end there as the Yankees racked up 3 runs and took the game 7-4. 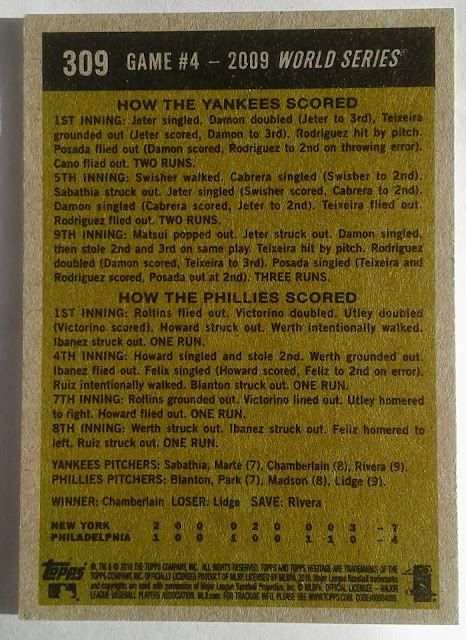 Interesting back of the card, where Topps mimics the 1961 World Series cards which Heritage echoes. Not sure but I believe 1961 is the only year that Topps used the "How They Scored" approach on the back of World Series cards. I don't think I need to see it every year but it is interesting to see it once.

The original 1961T #309 card also featured a big play at second. During the 1960 World Series the Yankees were the victims while the Pittsburgh Pirates were on offense.

The runner involved was Pirates left fielder Gino Cimoli. With the Pirates down a run in the fifth Cimoli beat a fielders choice throw to 2nd base. He would eventually be the first of three runs to score during the inning. That was all the Pirates needed to post a 3-2 victory.

One more thing
Johnny Damon is a Thai-American. That is the same Heritage as my own! 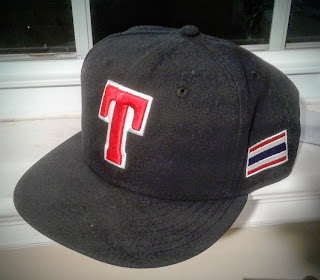 And in 2013 he chose to represent Thailand in the World Baseball Classic. Thailand didn't get very deep in the WBC, but Damon did get the opportunity to help develop the game there.

Hopefully someday I will get to see the Thai baseball team or even a baseball game in Thailand.

Until then I am happy to wear the above Thailand WBC cap whenever I get the opportunity.

Verdict
HOF, I gotta go with Johnny Damon and his Asian roots here.

The Angels In Order said...

Damon was a trip to watch with all that hair he had at the time.

He was always one of my favorite non-Cubs - very exciting on the field and quite the character off of it. However, I didn't realize he suited up for Team Thailand; I love the WBC!

Caveman Johnny was one of my all-time favorite Red Sox. I know he's not getting in the HOF but I sure hope he ends up with more than one vote. 2700+ hits, 400+ steals, WS rings in Boston and NY..that's got to be worth something, no?

Have always loved Damon as a leadoff hitter who puts effort into his game. I know people hate on him for a weak outfielder arm, but I think his speed in centerfield makes a nice tradeoff- minus those historic collisions (https://www.youtube.com/watch?v=LKnRB7EveQU). I was stoked on him in KC and Oakland but was ecstatic when he came to Boston as I think his time here was pretty special for the team. I'd love for this guy to be in the HOF but it'll likely be a Veterans Association vote in like 20 years (if it's possible)