Kick Off time for the 2008 NFL season. To mark the occasion I am opening up the first pack of the year. This is a Jumbo Pack of 2008 Topps. 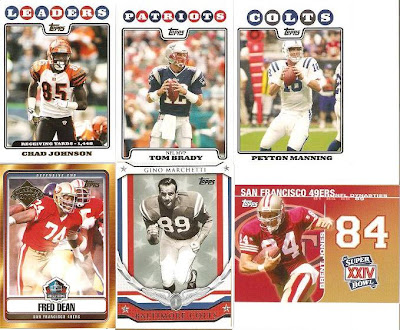 Here are some of the Highlights - The First card of the year was the Chad Johnson. Overall the pack came with 29 base veterans 2 foil vets (one of which was a dup of a regular base). 10 base rookies and 6 inserts. The 3 inserts not pictured are Brett Favre TD 401 (v the Lions 2006-09-24), An Armed Forces Fan - Ryan M Lenser Green Bay and a Gold Card of DeAngelo Williams 814/2008.

Overall the pack was fair, I didn't get any Vikings or Eagles who are my favorite NFL teams. I like the Honor Roll - GinoMarchetti card. Any Baltimore Colts card is fine a bonus for me. Other Highlights among the base veterans were Kurt Warner, Bobby Engram (PSU), Justin Tuck, Troy Polamalu, Reggie Wayne - Leaders Rec Yds, Tony Romo. The Rookies included Rashard Mendenhall (RB-PIT), Lawrence Jackson (DE-SEA) and Kenny Phillips (S-NYG)

Not a great first pack a couple of stars and some interesting inserts. Will probably pick up another pack or two until I get some Vikings.
Posted by deal at 6:00 PM