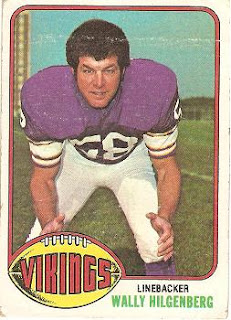 I was a little stunned to read about Wally Hilgenberg death due to Lou Gehrig's disease (ALS). It kind of also phased me when I flipped over his card and realized he was a few months younger than my father. Lately anytime I talk to my parents, it seems that they are going to a funeral or have been to one in the weeks past. I suppose you never really get used to it, but perhaps the funerals are therapeutic in some way.

Several years ago I read Mitch Albom's "Tuesdays with Morrie". Lou Gehrig's disease is pretty grim, but I enjoyed Albom's chronicle of his visits with his former mentor. The book was short and fit my attention span, uplifting and hopeful.

I found this article on Hilgenberg, with several quotes from Vikings teammate Stu Voight, pretty interesting. Voight refers to an "era when athletes were role models". I suspect Voight is correct and that there are not as many athelete role models today. I am hopeful that some are still out there and I am glad that Wally Hilgenberg was a good one in the short time that he was here.
Posted by deal at 5:45 PM

Email ThisBlogThis!Share to TwitterShare to FacebookShare to Pinterest
Labels: In Memoriam, Wally Hilgenberg