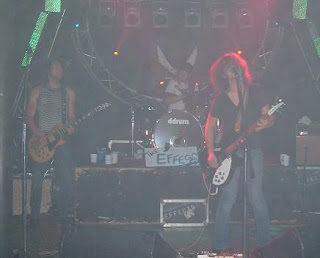 Spent the weekend following one of my other passions, Music. Every year during the last weekend of September Dewey Beach, the best little party town in Delaware, hosts a music festival with well over 100 bands performing original music. Most of the bands hail from the Mid-Atlantic area and are playing for exposure. All events are free and plenty of adult beverages are consumed. We had pretty crummy weather but the festival was still great fun.

The best band I saw was Tulsa based the Effects, a hard rocking throwback band with a strong Led Zeppelin influence. I also enjoyed a Funk/Hip-Hop outfit from Philadelphia that goes by Da Rezarekt.

We saw several bands from the Virginia Beach area including a pretty good pop band the Influence as well as Jackmove who reminded me of the Squirrel Nut Zippers. I also caught a set by Songwriter JoAnna Lynne, which didn't exactly captivate me, but I did find her background and stories amusing.

Other highlights were the always dependable Fools and Horses from Baltimore, Nashville's Shirock, and the Milwaukee power pop duo Fever Marlene.

The Dewey Beach Music Fest is always a good time and if you're into checking out live bands or original music I highly recommend the event.

And Yes, all this fun did not interfere with us watching that great pennant clinching victory on Saturday.