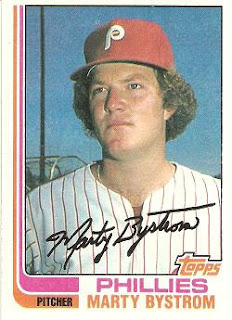 In September of 1980 the Phillies brought up 21 year old rookie Marty Bystrom to be a fifth starter in their rotation. He was much more. That September he went 5-0 down the stretch and was named the NL pitcher of the month. During the playoffs, he started the deciding game of the 1980 NLCS versus future Hall of Famer Nolan Ryan. The Phils would eventually win that game in 10 innings and move on to the World Series.

Tonight the Phillies are sending out another rookie, J. A. Happ, for a critical start during a playoff run. Hopefully Happ will pitch as well as Bystrom did that September some 28 years ago.

Here is some Bystrom Mojo for Mr Happ.
Posted by deal at 5:35 PM