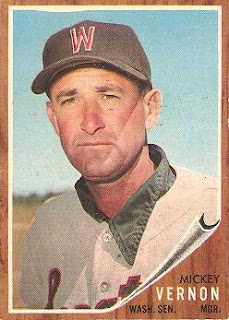 Mickey Vernon died at the age of 90 on Wednesday September 24th. I know little of Mickey Vernon's career, which spanned four decades, from 1939 through 1960, mostly with the lowly Washington Senators. He was somewhat of a local celebrity, who attended Villanova University and resided in the area. The seven time all-star and two time batting champ is on the 2009 Veteran's Comittee Ballot for the Baseball Hall of Fame. Vernon was recently named to the Philadelphia Sports Hall of Fame and will officially be inducted this coming November.

Philadelphia Author/Sports Historian Rich Westcott wrote a biography of Mickey Vernon that was published in 2005. Vernon and Westcott made several appearances promoting the book at the time, but I never made it out to one of the signings. If my memory is correct Vernon also had a movie camera during his playing days and has a pretty impressive personal collection home movies featuring the baseball players of the 40s and 50s.

Mickey Vernon, by all accounts, was considered to be a gentleman and was well regarded in his community. It is good that baseball has such representatives and it is sad to hear of their passing.

Mickey Vernon Wikipedia
Posted by deal at 8:16 AM

Email ThisBlogThis!Share to TwitterShare to FacebookShare to Pinterest
Labels: In Memoriam, Mickey Vernon