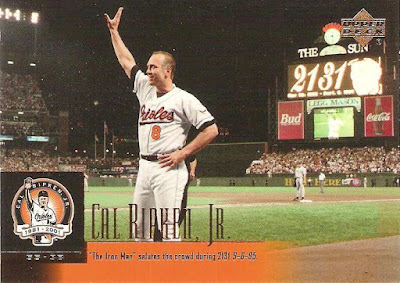 When he finally ended the streak Ripken did it gracefully. Unlike most of the latter years of the streak, in the closing weeks of 1998 the Orioles were out of the playoff chase. According to the Cal Ripken Wikipedia entry he did not want questions about his playing status to be a source of controversy during the off-season and he also wanted to end the streak entirely on his own terms while he still could.
During his streak there was much debate about whether or not 's playing everyday benefited or hindered his team. I have always been of the opinion that regardless of how much a day off may have helped Ripken hit better or get to another ball in the field, that as a team the Orioles were better off with Ripken in the line up everyday. His career numbers without the streak speak for themselves (member of 1983 World Champion, 431 HRs, 3184 Hits, 1695 RBI, 1647 Runs - 2 MVP, ROY, 19 time all-star). You don't put up those numbers against major league pitching without bringing your A-Game for a lot of years. Ripken did that and by most accounts he was also a superior fielder with a high baseball acumen - As a shortstop he was in the right place at the right time, because he studied the game, knew his pitchers, studied opposing batters and understood baseball situations. These are skills that a good baseball organization needs to foster to remain consistently competitive.
During the streak, I saw Ripken play for the Orioles five times. The Orioles won all 5 of those games. I also was able to see Ripken play in the 1996 all-star game in . That day he broke his nose in a freak accident while they were taking the team photograph, but the streak continued. The player that subbed in for Ripken was the then 20 year old shortstop Alex Rodriguez. In 1997 A-Rod represented the American League as their starting shortstop, ending Ripken's run of 13 consecutive All-Star starts at the position. Ripken remained a starter but at his new position, 3rd base. At the start of the 2001 All-Star game, which occurred during Ripken's farewell season, Rodriquez took the field at third base, insisting that return to the post he manned for so many seasons. It was the last time that Cal Ripken would ever play at shortstop. And, it was the first time that Alex Rodriguez would play third. It's odd how things work out, who knew that in the near future A-Rod would end up playing many more games at the hot corner.
Ten Years later, I salute Cal Ripken. Thanks for taking the field everyday. Thanks for being a contributing member of your community and thanks for being an ambassador for Baseball.