Getting back to some of the things I found at the Philly Show. 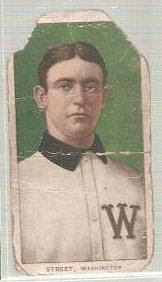 I could not let a couple of low end T206 cards go. This T206 is of Gabby Street who was a light hitting catcher for several teams in the early 1900s. However, He is also considered a significant mentor in the development of Hall of Fame pitcher Walter Johnson.

After his playing days were over Street had a fairly successful career as a manager including a World Series Championship in 1931. 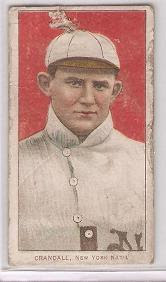 I picked up one other t206 of Doc Crandall who according to his wiki page is basically considered the first relief pitcher. His Baseball-Reference page concurs as he led the league in games finished 5 times and his career 2.93 era is still ranked 64th all-time.

I know very little about the above T58 card. There are a series of non-sports tobacco cards from the early twentieth century with different themes (T37 Autos, T25 Actors, T42 Birds etc) According to the back of the card there are 50 cards in the fish series. Semi-related Flying Fish is a favorite beer among the Phungo Phaithful.

For the Collector
I really don't know much about these 100 year old cards, I am not really even sure that they are authentic. At any rate the cards went as follows $4.00 for Street, $9.00 for Crandall and $1.00 for the Flying Fish. Of course all are in fair/poor condition as you can see and all three cards are Piedmont Backs. The t206 museum site is where I go for my info on the classic set.

$10.00 is likely my breaking point to consider a T206. They are not a priority for me and here I was lucky enough to find two cards of players with interesting backgrounds. A graded (Good) Gabby Street, which is significantly nicer then my corner deprived version recently went for $21.85 on ebay. Doc Crandall went for $21.77. I was unable to find any recent sales on t58 cards, there is a BIN of a nice flying fish card for $13.45 - and there are a couple others in this set that have a BIN of $12.00

For a look back at some of the other cards available at the 09 Philly Show check here and here and here.
Posted by deal at 10:12 PM

Nice finds. The oldest card I have in my collection is from 1940.