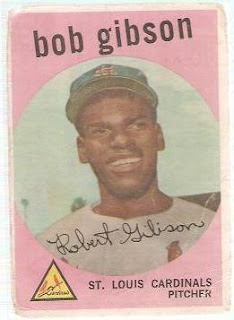 If you are building a vintage set you at some point have to decide how you are going to handle the star cards, special cards, short prints and Hall of Famers. Because of the laws of supply and demand, these cards are typically both harder to locate and more expen$ive.

For the most part my 59 set is made up of cards I would describe as in good condition. I avoid cards that are written on, torn cut up etc. Dinged Corners and surface wear don't bother me to much.

That brings us to 1959 Topps #514 Bob Gibson. This is THE rookie card of the 1959 Topps Set. It is also part of the somewhat scarcer high number series of 59 Topps. I already have all three Mantle cards from the Set and the Mays base card, so I was well aware that this was likely the next big fish from the set.

This card has some minor creasing, surface wear and soft edges. If I were a Cardinals fan and wanted a Gibson Rookie to be the center of my collection, I would probably have passed on this card.

But as a good card of a big name Hall of Fame player that I need to build a 50 year old vintage set - This card is perfectly fine.
For the Collector

This particular card went for $30. On ebay a card in similar condition just sold for $34.99 shipped. A noticeably better conditioned card went for $39.98 which appears to be a pretty good deal to me. Beyond that there are several auctions that finished in the $85-$100 range. A really crisp graded card top ended at $1384.00 on November 22nd. 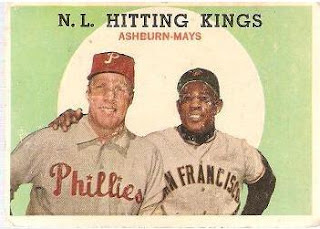 I believer there are three cards featuring Willie Mays in the 1959 Topps set, this one also features Phillies Hall of Famer and fan favorite Richie Ashburn. This went for a reasonable $4.50. I also picked up the #20 Duke Snider card for $2.50, but it is in really poor condition, and looking back I probably should have bypassed that card.
Commons 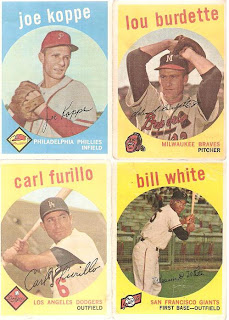 The Koppe card is really not a common, it is part of the High Numbered Series which start at #507. The "Lou" Burdette card is notable for the misspelling of his first name LEW short for Lewis. This card "inspired" the much derided 2007 Topps Heritage super-scarce parallel "Jon" Smoltz card. What is Carl Furillo doing in the bargain bin??. And finally Bill White, who was one of the first black players in the Majors and as the President of the National League (1989-94) was the first African-American to hold such an office for a Major Sports League.

The Joe Koppe card as well as 7 other hi numbers went for $1.75. The regular set commons of which I picked up about 30 went for 35 cents each.

If you would like to contribute to the Phungo 1959 Topps Set Building challenge please let me know, I have lots of common duplicates to trade. My 1959 Topps Want List is chronicled here. 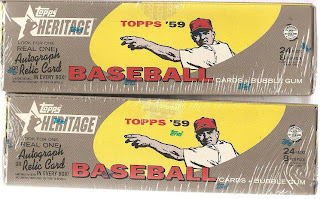 Yep this was Team Phungo's last splurge of the 2009 Collecting Year. I finally broke down and decided to build the Topps 1959 Homage set - 2007 Topps Heritage. The two boxes went for a reasonable 90.00 combined and I got the dealer to toss in some new hobby packs 09 Heritage High Numbers at a discount.