I picked up two boxes of 2008 Topps Heritage at the Philly Show earlier this month.

I have been working on the original 1959 Topps Set and thought building the companion Heritage set would be an interesting project. The two boxes went for $90.00 combined and these are the results:

Each box is composed of 24 packs of 8 cards each. Within each box there are 3 rows of 8 packs. Within each of the rows, I think 7 of he 8 packs contained either a chrome card, short print or insert. And one of the special cards per box is a relic or auto - usually relic - I think the odds of pulling and auto are about 1:10 Boxes. There is also a 1:2 box chance of pulling a buyback of an original 1959 Topps Card. 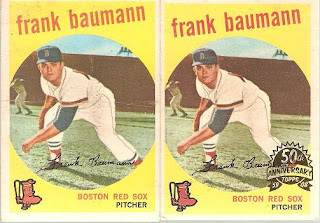 1959 Topps #161 Frank Baumann
1959 Topps #161 Frank Bamann (2008 Heritage 50th Anniversary Buyback)
Unfortunately the #161 card of The Red Sox Frank Baumann was not one that I needed for my 1959 collection,but I will keep it as part of the 1959 Topps Auxiliary Collection. For even more detail on the opening of this Buyback please check this entry over at A Pack to Be Named Later. This card came from box 1. 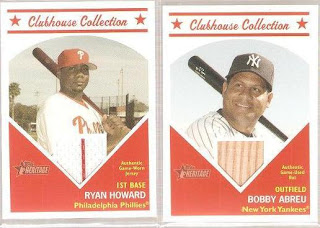 Fortunately these Game Used Relic Cards found the right collector. I don't open a lot of boxes, and I doubt I have ever pulled a Phils auto or relic. I usually just pick them up via trade or auction. Still it is neat to actually get one in a box I have opened. I fall in the camp of Phillies Fans that appreciated Bobby Abreu - He had his shortcomings but I always thought he was a strong contributor and he was fun to watch. The Howard Relic is nice with a stripe on the jersey and is from the most common Relic Group D. The Abreu bat card came from Relic Group C (1:90).

Both relic cards were pulled from a pack in the leftmost row of the box - Howard was the 7th or 8th pack in the row from Box 1. Abreu was the relic from box 2, column 1, 2nd pack. Bollocks for me as I typically pull my Packs from the Right Hand side of the box.

Box 1 yielded 4 Chrome Cards one of which was a refractor parallel - Unfortunately the Ubaldo Jiminez card has a slight scar on the Right Hand side. 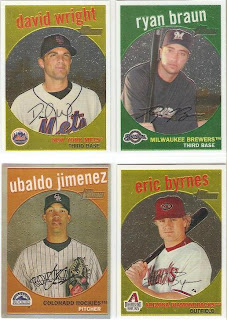 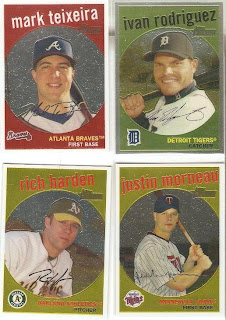 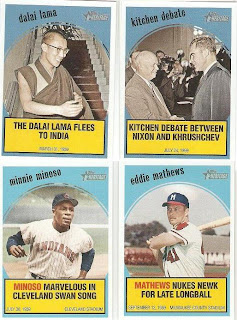 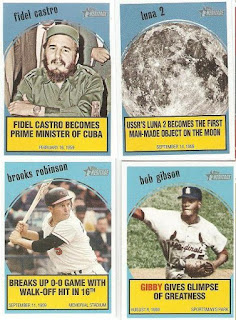 Between the 2 boxes there were 9 Flashback cards 4 News FBs and 5 Baseball Flashbacks. The Brooks Robinson Card was present in both boxes. The Top set of 4 cards above is from Box 1, while the latter set is from Box 2. Good and Bad here - The Good is that one of the New Age Performers Card was of Ryan Howard. The Bad is that both boxes contained Mr Lackey. Between the two boxes I got duped on both the NAPs and on the BB FBs. The Howard Card was contained in box 2. 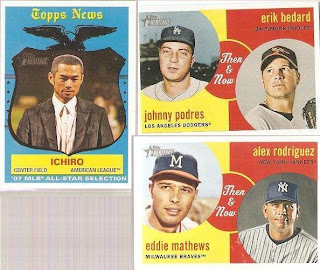 No Dupes here. Only observation from here is that both of the "Then" halves of these cards are higher Cache players. Johnny Podres was the pitching coach of the 93 Phils and will forever be the Yoda Like Zen master for that staff. And of course Eddie Mathews is far to cool to be paired up with Diva Rodriguez. Mathews and A-Rod were from Box 1, Podres and Bedard Box 2.

I placed the Short Printed Ichiro All-Star card here as well. Box 1 yielded 9 SPs while Box 2 had 8, although 2 of the Shorts in Box 2 were from Box 1. Between the two boxes I received 15 unique short prints.

Ok, I made up my own rules for set building. The first thing I did was throw out differentiating between the Green and Black Back Parallels. If I had one of the two cards for that card number, I crossed the number off my list - I will not let Topps control my set building - It's my hobby and I will collect as I see fit!

Overall I came up with just under 2/3 of the base set, which is about what I expected. The Cards that I already had in the Phungo Collection that did not overlap the box break numbered about 40(including short prints). I still need 127 cards to complete the base set.

The only disappointment was having FOUR duplicates (5 if you include the Braun Chrome) in the insert cards. That is a bit high I think, I purposely picked two boxes next to each other in hopes that would minimize collation issues.

And one other complaint and a curiosity - I received very few of the hero numbered cards in this box. I didn't get any of the cards that ended in hundreds, and only 2 of the 4 '50' cards. I didn't pull #1 Vlad Guerrero either. Mathematically I would of expected to pull 6 of these 9 hero numbers but only came up with two. Could it be that some of the star cards were quietly short printed?

If you need even more 2008 Heritage info click here for the A Pack to be Named Later entry for a pack from box 1.

Or click here for a little bit more insight on the buyback.

I too am trying to put the 08 Heritage set together. If you have a need list I can go through my doubles to see if I can help you out.

C-OK I will definitely check with you - I am in the process of putting together my Have and Want Lists for this set. probably won't get anything together till January tgough.