In lieu of getting a blaster I picked up 5 packs of the 09 Topps Heritage High Numbers at the Philly Card Show. If you want to read a specific pack break on the first pack check here for my post over at A Pack to be Named Later.

The five packs were as expected 30 heritage cards and 10 U&H cards. Every back broke down as 3 Heritage followed by 2 U&H then the insert and the final 2 heritage cards.

I got two Phils, The J A Happ card below and a John Mayberry card which is featured in the APtbNL post. Former Phil Jim Thome was also present. 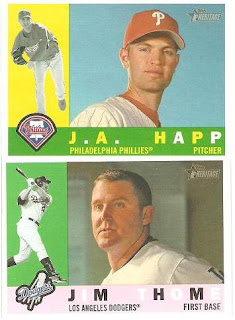 This action shot of Thome may be picture 4 in the link. 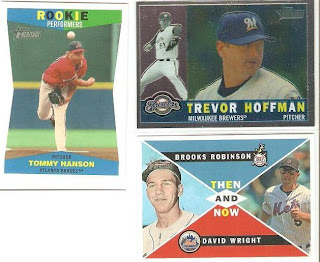 Rookie Performers Tommy Hanson, Chrome Trevor Hoffman, and Then and Now featuring a player from my favorite AL team and my least favorite NL team. Hopefully Wright doesn't play long enough to be paired with Mike Schmidt in a future Heritage T&N. The other 2 inserts I picked up were short prints of Andrew McCutchen and Penn Alum Mark DeRosa. 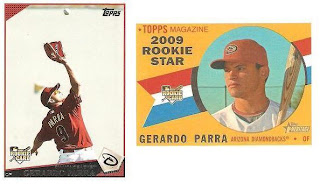 Picked up both versions of the Gerardo Parra card - he was the top of the rookies in the 5 packs other than McCutchen. 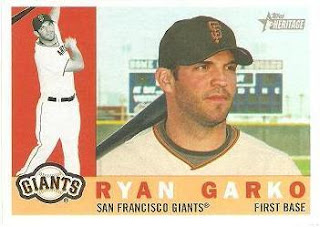 Photoshop anyone?? or did the Giants send Garko to spring training after picking him up on July 27th.
Posted by deal at 8:55 PM