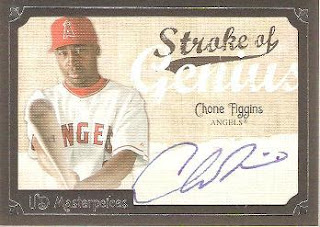 Chone Figgins is a Seattle Mariner pending a physical. He was an Angel from Anaheim/LA or California. This made this one an easy one for Card Buzz to knock out a Triple, although I am not sure how happy he is with Figgins moving to the division rival Mariners.

I picked up this auto in the spring. It went for $3.82 via auction. The low recent auction on Figgins Auto is for an 08 Topps Stadium Club Beam Team which went for $4.50. $7.09 was the low On Card Auto from 09 UD Goodwin Champions.

Bonus
Sadly nobody got the bonus, despite 23 players being on the Phungo Roster. Some of the names on the team represented by Bloggers in this Years STS (or teammates of players guessed) included: Russell Martin, Carlos Lee, Miguel Tejada, Joey Votto, Rafael Soriano, Jair Jerjenns. Rodrigo Lopez was my lone Phillies player this season.

This is it, we are down to one more inning and we have a very close competition. Last year PatSearcher ran away with the competition which was over by this point. This Spot the Sig! will go down to the very last week and potentially longer. Basically anyone who has scored a run or has two or more runners on can still win this edition of Spot the Sig!

You are welcome to join the game at anytime. If you need more Spot the Sig! details click here.

And in case you haven't heard, the Spot the Sig! Winter 2010 Edition will be held over at Padrographs. Rod plans on starting on January 3rd, and I am looking forward to it, for more information click here.
Posted by deal at 5:41 PM

Email ThisBlogThis!Share to TwitterShare to FacebookShare to Pinterest
Labels: Angels, Chone Figgins, For The Collector, FTC, Spot The Sig, STS

This one kills me. I had an autographed card of Figgins in my collection once and even featured it on my blog. Should've gotten that one.