The Concorde Mall has skylights throughout which I am sure are wonderful for letting in the tons o light most of the year. Unfortunately the AC in the mall cannot compete with the 100 degree heat and the sun just keeps baking down on you while your trying to sort through dime bins.

But that is my only complaint about the show - A couple of vendors I enjoy seeing were not there, and the $1 Vintage guy wasn't there so there were some disappointments. Still I manage to spend $53 mostly at dime boxes. Here are some examples of things that were selling. 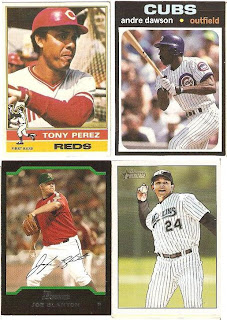 There was a guy that had a bunch of the cards that were thrown out by someone, probably me - during my various moves during the crazy years during and surrounding college. He had plenty of 1976-79 Topps cards for a nickle a piece. I splurged for about 160 of these including the 76 Tony Perez above. I think I only found 3 HOFs including this Perez and his 1977 card (Expos) as well as a Goose Gossage card.

The other 3 cards came out of a dime bin. Congrats to Andre Dawson on his Hall of Fame induction. This card is a BBC magazine cutout. It actually looks really good. The Blanton card goes into the 2008 WSC Phils in other unis box. It is interesting that this is an early card of Blanton and he is in a position you frequently see him in for many cards and pictures. The Miguel Cabrera is the short printed no sig variation - nice find for a dime. 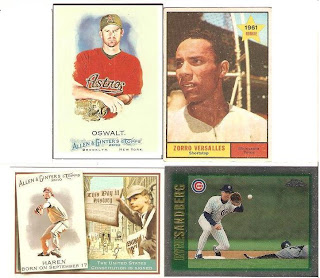 This is partially the Trade Deadline Group. Both the A&G cards were in dime boxes. The Oswalt card is a short print (#333). I would like to see the Phils land either pitcher, but if they don't start hitting, I am not sure either pitcher would make a difference. There were plenty fo the A&G This Day in History cards in the dime bin. At 1/pack this is no surprise. I picked up about a half dozen of the SPs which I was happy to find in the dime bin.

The Zorro/Zoilo Versalles card is a Rookie Card of an MVP player (1965) - nice find for .50 cents. I doubt that you will find an older rookie card of a future MVP any cheaper than that. Finally the Chrome Sandberg card. For most Hall of Famers if you find a Chrome Card from their playing days for a dime, there is no reason to not have the card in your personal collection.
Posted by deal at 10:41 PM

Any way that Dawson can be pried out of your hands??? Let me know... Thanks!

The Dawson card has been put in the Reserved for 30-YoC pile. I will send you an email with some other stuff you may be interested in.