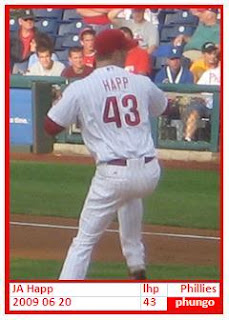 It is definitely a happy occasion as the Phils are bringing in the Astros Ace Roy Oswalt. But I will miss the quality player in JA Happ who is headed the other direction. Happ's numbers speak for themselves, As a Phil the young lefty has been a competitor, a winner and he will always be a member of the 2008 World Series Championship Phillies team.

This photo was taken during a game on Saturday June 20th 2009 in a game versus the Orioles. It was one of the better games that I have seen where the Phils lost. Happ Pitched well scattering 10 hits over 6 innings yielding 2 runs. The big moment was a pinch hitting appearance by Ryan Howard, who was suffering from the flu. On a night when a dozen ball died at the track, He hit one of the most majestic home runs I have ever seen. The Homer capped a 5 run 7th inning which gave the Phils a 5-3 lead. Unfortunately in one of his early test runs as a Closer Ryan Madson would blow a save in the 9th. The Orioles pesky second baseman Brian Roberts hit the game winner on a 2 run shot to the RF power alley.

Sometimes you see great games when your team loses. It's tough to take at the time, but I am glad I was there.
Posted by deal at 9:55 PM