I used to have a regular feature I referred to as "Hall of Fame Thursday". I am now going to try and revive the series under the heading of "Hall of Fame Profile". This should give me the freedom to continue the feature while not be tied to a specific day of the week. Once again the HOF profile posts will not be restricted to the Baseball Hall of Fame and Players enshrined in Cooperstown. I will also be featuring a heavy dose of folks in the Philadelphia Sports Hall of Fame. I will occasionally feature the HoF players or people from other popular sports, not so popular sports, other fields, schools and locations. However the main focus will remain Baseball and Philadelphia with the other folks mixed in.

The Phils were in St Louis battling the Cardinals this week (1 up 3 down ) and I thought that largely known as a Philly, but one time Cardinal, Steve Carlton would be a great way to Re-kickoff HOF Profile. 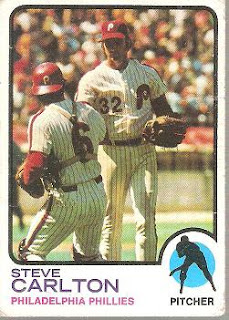 1973 Topps is not one of my favorite designs. But I do like this card.

#2 I like it because for a long time Tim McCarver was known as Steve Carlton's personal catcher. This photo features Carlton with a catcher that may be McCarver. The Photo is likely from 1972, Carlton's first year with the Phils. McCarver was with the Phils in '72, unfortunately for us card photo sleuths McCarver was traded mid-season to the Expos for John Bateman. Of course Bateman would wear number 6 as a Phil. So unless someone can make out weather this is Bateman or McCarver we may never know. 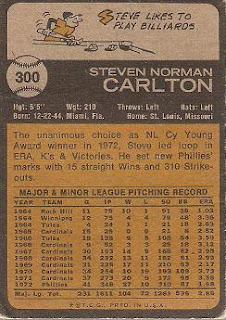 I feature the flip side of the card here just for the cartoon. The artist has shown a little creativity giving the comic a baseball motif for billiards...although cartoon Lefty is shooting Right-Handed.