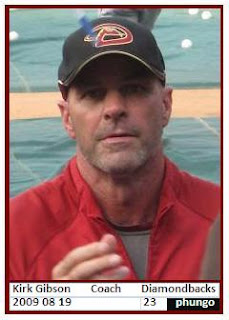 I Took this photo prior to a D-Backs @ Phils game last August. It was a Cliff Lee game - he was masterful, going the distance only allowing 2 hits and an unearned run. The Phils won easily 8-1.
prior to the game Kirk Gibson signed maybe a dozen autographs while on his way out to monitor batting practice.
Starting this Holiday weekend, BP will be different for Gibson - He will now be the leader of the 2010 Diamondbacks, who have had a disappointing first half. Best of luck to Mr Gibson, He gets a good-guy award from Team Phungo for being a pretty big star, but not being to big to sign a couple of autographs - It's good to see that there are some players that realize that the game is still about the fans.
For a more detailed look at the D-Backs Phils game last year click here.
Posted by deal at 7:11 PM