The Phils dropped the final game of a 3 game series against the Braves on Weds night. Jamie Moyer held the Braves to one run through five innings, but couldn't get out of the 6th inning. The Braves sent 10 hitters to the plate in the 6th and scored 6 runs which would lead them to the 7-5 victory.

Brian McCann had a bases loaded double which broke open the 6th inning. Martin Prado added a pair of homers in his 3-5 evening. Ryan Howard and Shane Victorino each homered for the good guys while Jimmy Rollins collected a pair of doubles.

Kris Medlen earned the victory for the Braves, while former Phil Billy Wagner (hitting "only" 96mph these days) picked up the save. During the big 6th inning I found out that Medlen is a switch-hitter, and performed the rare feat of striking out from both sides of the plate in a single inning - good thing or else the Phils might still be trying to get the Braves out.

This is a picture of Jamie pitching to Chipper in the first inning, if you enlarge the picture you can see the baseball right below the right hand side of the first base coaching box. Moyer would win this AB as Chipper popped out to center.

It was a hot somewhat humid night - fortunately there was a bit of haze which actually kept the sun from beating down on us in the early innings. Braves fans were fairly well represented, including a confused young lady in front of us who wore a Braves cap and a Jayson Werth T-Shirt.

One thing that you really get a sense for when your actually at the game as opposed to watching on TV, is the size of some of these guys. The Braves have a couple of guys that are just huge. Tommy Hanson and Troy Glaus were among the giants. Perhaps it was just that I spotted them standing next to Matt Diaz. 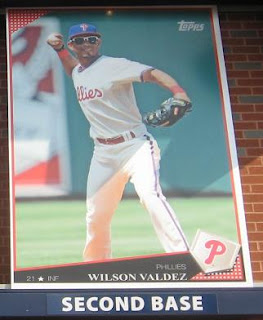 Wilson Valdez was still a Met in 2009, but he gets the 2009 Topps treatment as a Phil in the above starting line up card.

Cards that will likely never be in my PC 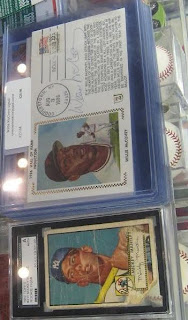 Excuse the layout here - I am not going to put in the time to figure out why I can't orient this photo correctly.

Hunt Auctions is based in Exton PA about an Hour west of Philadelphia. They have a case of items for sale at the ballpark - it may be in conjunction with their memorabilia auction at the All-Star fan fest this week. This is a 52 Mickey Mantle in basically horrible condition, if I am not mistaken the salesman quoted a price of $35,000 for the card. The McCovey Autograph mext door was listed for $20 - a comparative bargain. Despite the Phils losing an important mid-season game and series and the hot humid conditions, it was still a fun night at the ballpark. We are half way through the season, hopefully Team Phungo will catch some Wins soon.
Posted by deal at 5:39 PM