Project '62 is where Cubs fan Chris chronicles his journey building the beautiful 1962 Topps Set. Today we check in with Chris while the Phils visit Historic Wrigley Field to play the Cubs.

1) What series of 1962 cards (other than the hi one) is the toughest to find?
It seems anything higher than #400 (note: Hi Series 1 starts at #447 and a tougher High Series starts at #523) is not only hard to find, but rather expensive. This is something I should have looked into a little more before I committed to collecting the set. I hate paying a premium for a guy who should be a common, just because Topps couldn't figure out how to release a baseball card set in less than 6 series. Damn you Topps!!!!!

phungo note: I am sure that most of you have seen this but the Project '62 banner page is as nice as any page out there - definitely check it out. 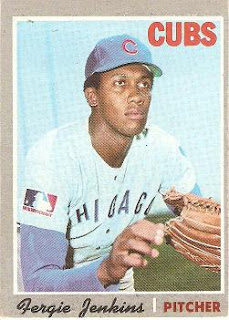 1970 Topps #240 Fergie Jenkins
2) What is the best Cubs card set from the 70s?
I would say 1970. The checklist is full of Cub's legends like Jenkins, Hundley, Kessinger, Santo, Williams, and Banks. Oh yeah, Durocher too. It's also pretty affordable. Unfortunately it is also the year that depicts their legendary meltdown of 1969. You take the good with the bad I guess.

3) Who will be in the Cubs 2011 starting Outfield?
Well I heard next year Lou wants to carry 12 outfielders and rotate them around like a merry-go-round, so who knows! Seriously though, I like what we've gotten out of Byrd this year. He deserves his spot next year. I'm sure no one will be dumb enough to take on Soriano's absurd contract so he'll still be hopping around and booting balls in left. I think Fukudome will be wearing different colors by the end of the year so that would leave Colvin in right, which is a good thing. He's quietly putting together an arguement for the ROY.

4) When will Bob Brenley take over as Manager of the Cubs?
Never!!!! I can't stand the guy. He's like your half drunken uncle who tells you the same stupid stories over and over again for the first time. In my Cub's dream world I would like to see Trammell get the nod next year and Sandberg get the bench coach position. Then after Trammell fails, give Sandberg the lifetime contract! Or better known on the north side as The Soriano Deal.
5) Who would you like to see sing "Take me out to the Ballgame"
Bartman, a goat, and the black cat that ran out in front of Santo in NY in '69. Together the trio will erase every thought of a curse with their sweet, sweet harmony, the Cubs will win, and everything will be right with the world.
Phungo Box Score
4 out of 5, I am bummed to see that Brenley isn't so well liked in Chicago. As part of our cable package we get a few WGN games and I actually look forward to those Cubs games when I can catch them - Brenley has always been a large part of the attraction - I cannot stand Ken Harrelson when we get the Sox games.

Looking Back
For a look back at a Previous Phungo 5 on the Cincinnati Reds with Nacho's Grande click here.

If you haven't voted in the George Steinbrenner poll (to the right please check it out). For background info on the poll click here.